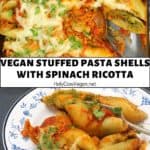 A hearty, filling and delicous dish of vegan Stuffed Shells with Spinach Ricotta for dinner. The shells are stuffed with a creamy, silky spinach and cashew mix and smothered in vegan marinara and cheese. You can make the marinara with vegan meat or lentils--it's yummy either way!

Jay loves pasta dishes with lots of tomato sauce and cheese, and here's one recipe that never fails to make him go for seconds and even thirds: vegan stuffed shells with spinach ricotta.

This is hearty, satisfying food and it's also one-dish: you will get all the veggies and protein you will need from it.

It takes a little time to stuff the shells but you can make most of this dish ahead, when you do have a little time on your hands, and assemble it in a hurry.

Shell pasta, especially the large, stuffed shells, go down especially swimmingly with kids (How did you get the stuffing in the shells, mommy? Erm...because I'm a little big magic!). The shells just look fun and when they taste just as fun, you can be sure they'll disappear before they can say "grilled cheese."

How long should I cook the pasta shells?

You need to slightly undercook them as they will continue to cook in the oven.
Cook the pasta shells two minutes less than the recommended time on the package. That will also make it easier to stuff them -- they will break if too soft.

I ran out of stuffing but I have a few pasta shells left over.

The filling should be just enough to stuff 12 oz of pasta shells, but if you do have a few shells leftover, just tuck them into the baking dish between the stuffed shells. No reason to waste, there's lots of good stuff for them to soak in with the marinara, mozzarella and parmesan.
If you have leftover ricotta, just scatter it on top of the shells after placing them in a baking dish.

Can I make ahead and freeze?

You can make the entire pasta ahead of time. Cover the baking dish with aluminum foil and bake, covered, for 30 minutes, and then uncovered, for another 30 minutes, before serving.
You can also make the different elements ahead. The marinara sauce and ricotta can be made up to five days ahead and refrigerated.
The cashew parm can be refrigerated for a month.

What to serve with the vegan stuffed shells

It's a one-dish meal in itself, but a fresh salad on the side would be amazing with this. 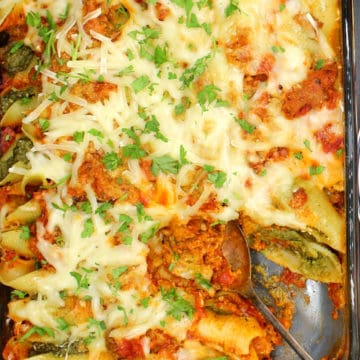