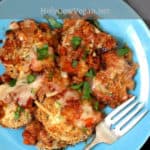 This tasty and authentic-tasting vegan Eggplant Parmesan has crispy layers of eggplant baked in layers of marinara and vegan cheese. It is a dish to savor, love and remember. This recipe also freezes easily, making it the perfect make-ahead dish. You can also make it gluten-free.

I amped up my vegan Eggplant Parmesan recipe to make it even more nutritious and I couldn't wait to share it with you.

At the supermarket this weekend, eggplant was one of the few veggies that I could find, and I was only too happy to grab it because I don't think there's another vegetable that gets as much love in our home.

And it is incredible in this vegan Eggplant Parmigiana. If you know someone who doesn't love eggplant, this is the recipe to make them change their mind.

One of the things I love about this eggplant parmesan recipe is that it is eminently freezable, so it's a great meal to make ahead and stash away for another day, which is something so many of us seem to be doing right now.

My recipe doesn't veer too far from the traditional but because I wanted to make this more nutritious, I added more veggies and some veggie meat crumbles to the marinara. You can also just make this with my easy, five-ingredient vegan marinara, cut out the veggies and meatless crumbles, and it would be even easier and differently delicious. To keep this really, really healthy, I also don't fry the eggplant slices--instead I bake them into crispy, golden deliciousness.

How to make the best vegan eggplant parmesan

What do I serve vegan eggplant parmesan with?

This is a complete meal by itself, but a crusty Italian or French bread drizzled with olive oil works great for a side.

If you really want to dress it up, serve it with a fresh side salad. 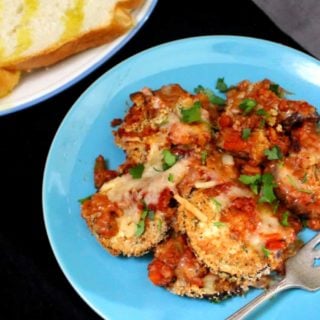 For dredging the eggplant slices: