An easy and tasty and comforting and creamy Vegan Irish Leek and Potato Soup made with just six ingredients. You'll be licking your soup bowl!

Usually, when I write up these blog posts for you, I have my own little doggie opera running in the background, drowning out CNN or whatever else is running on TV. You see, Leo and Lily's favorite thing to do all day is climb up on the bed or couch and look out of the windows to sniff out any movement. And if there's a dog moving, the singing begins.

Leo has a loud, enthusiastic bark that ends in a whine -- a sort of, look at me, look at me, I'm here, won't you stop and play with me, please?

Lily's bark is shrill, almost a warning -- don't you dare stop around here! Uh-oh, did you did you just pee on the hydrangea? You better watch your back!

It's not just Lily and Leo singing. We live in a neighborhood with many, many dogs -- there are seven houses just on my street, and seven dogs. So the canine visitor is sure to get a greeting from almost every home he or she walks by.

Coco, in the house to our left, is an elegant brown lab, with a bark like a foghorn that travels into the house through closed windows and doors. Riley, a black and white mutt, barks in short, persistent bursts that never seem to end. Franklin, who lives in the house to our right, is elegant and gentlemanly in his black and white tuxedo coat and probably the quietest of the bunch, deigning only occasionally to let out a short, single bark that says, Don't forget me, I'm here too!

There's no doubt that dogs make our world so much better. But they also make it so much noisier, don't they? I wouldn't have it any other way, though, would you?

The Vegan Irish Leek and Potato Soup I have for you today is a bowl of creamy, comforting deliciousness that perfectly showcases the flavor of these two healthful and spectacularly tasty veggies.

Irish foods often have minimal seasoning, and this soup is no exception. In this recipe, all you have is some oil, potatoes, leeks, onions and vegetable stock. And some cashew cream.

I sometimes throw in a clove or two of garlic, simply because I can't help it and because I think garlic can make anything better, but you don't really need it. 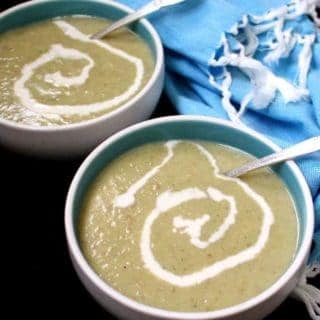