If you love a hearty vegan beef stew, you will fall in love with this vegan Irish Stew recipe. The flavor is exactly that of a traditional lamb stew eaten around Ireland. It is hearty, delicious, and will please even an omnivore. The gravy is creamy, aromatic with spices, and packed with healthful vegetables like carrots, celery and potatoes. Guinness adds more traditional and authentic flavor.

Traveling vegan is not only easy in Ireland, it is practically a pleasure.

In the week we just spent in this gorgeous, historic -- and astonishingly vegan-friendly -- country, we chugged down pints of the beloved and now-vegan stout at the historic Guinness brewery at St. James Gate, ate fabulous vegan burgers with sweet potato fries at the O'Neill's pub, picked up vegan sandwiches for a rushed lunch at the convenience store, and chowed down on tasty vegan pizzas for dinner at Aperitivo, a Dublin restaurant known for serving fun vegan food.

And that was not all of it, not even close. We are a travel-loving family, but in the past many of our trips in foreign lands and here in the United States have endured the annoyance (for me) of having to either make do with salads for most meals, or having to make a less-than-satisfactory meal out of sides. But in Ireland, food was no problem at all.

At the hotel in Dublin where we stayed, right in front of the picturesque and historic Christ Church, breakfast was usually a traditional Irish affair, but there were plenty of options for vegans and gluten-free eaters. And other eateries with plenty of vegan options -- many with specific vegan menus -- were just a short walk away.

On our way to the wild, windswept Cliffs of Moher, we stopped by the small town of Doolin, where I found a delicious spinach and chickpea curry served over brown rice at a local pub. In Belfast in Northern Ireland, I ordered a delicious stir-fry at The Mill restaurant for lunch. And at a Johnny Rockets in Dublin where we stopped to grab a quick lunch one afternoon, I ate an Impossible Burger (I don't think their U.S. franchises are serving this yet, although Burger King recently rolled out its Impossible Burger nationwide here in the U.S.A.)

When you travel around Ireland, a good part of the landscape is made up of rolling and picturesque green fields and hills dotted with grazing cows and sheep -- a reminder that this is a country that loves its beef, butter and lamb. And yet, the vegans seem to fit in too.

In Galway, a small city with 650 pubs (as our very friendly and informative tour guide told us), we found a billboard that proclaimed, "Nothing humane happens in a slaughterhouse." Near Trinity College in Dublin, vegan activists handed out pamphlets with information on the cruelty of meat and eating plant-based to a steady stream of interested passers-by. At a pharmacy in Belfast, a sign next to probiotics targeted plant-based eaters: "Vegan? You don't have to eat yogurt for the friendly bacteria."

But one thing I didn't see or eat during my limited but full time in Ireland was a hearty vegan stew made with Ireland's favorite drink, Guinness. While beef and lamb Guinness stews are everywhere, the restaurants I went to at least had nothing resembling this Irish favorite in a vegan form.

So as soon as I got back home, I stirred up the pot with my delicious and meatless vegan Irish Stew, a recipe I shared with you many years ago for St. Patrick's Day. But this time I had a new appreciation of the ingredients -- and particularly the dark Guinness stout -- that goes into it.

When I first posted this recipe, Guinness was not vegan, because the process of making this delicious brew involved filtering it through isinglass, or fish bladders. Fortunately, in 2017 Guinness began taking steps to make its brew vegan, and beginning 2018 all Guinness now on the market is divinely vegan. Which also made it easy to glug all the Guinness I wanted to when we visited the storehouse at St James Gate in Dublin where it all began. Even better, restaurants at the brewery (with spectacular views of the city) had great vegan and vegetarian options as well.

Mine is a rather traditional stew, without the lamb, of course (wouldn't you rather just cuddle one?) It's also a one-pot dish with no more than 15 minutes of hands-on time needed.

I used soy chunks, dredged in flour and seasoned with herbs and then stir-fried until golden-brown, to replace the meat, which is usually lamb. The soy, when cooked this way, gets a wonderful texture, and who needs the meat? You can -- and perhaps should -- make this stew a day earlier, because this is one of those dishes that tastes even better the next day, when the flavors have had a chance to meld together.

Ingredients for the vegan Irish Stew:

I love Guinness. Can I use more in this recipe?

Yes! But keep in mind that more Guinness will add a bitter undernote to your recipe. While some bitterness from the brew makes this dish fabulous, a lot might not be up to everyone's taste. I'd advise trying out the recipe with 8 oz of Guinness the first time, and adding more if you think you want it.

Can I serve this stew to my child with the Guinness in it?

Again, yes. The alcohol cooks out and only leaves the complexity of the stout behind, adding tremendous flavor. So eat away without any worries.

What do I serve with this stew?

Try these vegan stews next: 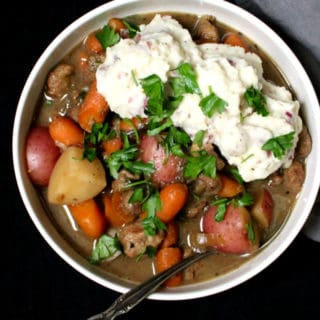 A vegan Irish Stew that is so like the traditional lamb stew served around that gorgeous country. This meatless version is hearty, delicious, and will please even an omnivore. The gravy is creamy, fragrant with spices, and packed with healthful vegetables like carrots, celery and potatoes. Guinness adds even more traditional and authentic flavor.