A Vegetable Frankie is delicious street food from Mumbai, with a flaky, crispy wrap coated with an egg wash that melts in your mouth. This one has a delicious spinach and tofu filling and it's entirely eggless and vegan.

If you don't know what on earth a Frankie is, you're in for a treat.

In the days before burgers and pizzas descended on Bombay's food landscape, the Frankie -- a delicious, flaky wrap stuffed with veggies or meat -- was the fast food of choice for many. It was served on the streets and in restaurants that showcased food with a western flair, although it really is a uniquely Indian -- and even more uniquely Bombay -- wrap.

The Frankie is said to have originated at the Tibb's restaurant at Churchgate station in Bombay, and not surprisingly, it was especially popular with busy commuters rushing in and out of the busy railway station.

Eating a Frankie in this, one of the busiest railway stations in one of the world's most crowded, and hot, megalopolises, as commuters literally elbowed past you -- almost knocking the food out of your hands-- was a gastronomic experience that, through the lens of time and distance, appears almost perfect. And it is one I was lucky enough to savor over and over again.

I still remember those wonderful, tantalizing tastes: the smokiness of the spices and the soft, crispy texture of the wrap. There really was no flavor quite like it.

The Frankie's name owes itself to Frankie Worrell, a West Indian cricketer who, the story goes, was a favorite of the founder of Tibb's restaurant. And its origins lie in a pita wrap, which the founder ate in Lebanon and then adapted to make it more uniquely Indian.

But this is no pita wrap, as delicious as that is. One of the key reasons a Frankie tastes absolutely and mindblowingly unique is an egg wash that is brushed on both sides of the wrap, after which it is baked on a super-hot griddle. The eggs give the Frankie a distinctive golden-brown pattern on the outside and a crispy, flaky texture.

I've seen vegetarian versions of a Frankie that do away with the egg wash altogether, but then you are left with is a vegetable wrap that is not a Frankie. So when I made my vegan Vegetable Frankie at home, it was very important for me to find a substitute for that egg wash that would give me that perfect, tender crispness that makes a Frankie as delicious as it is.

The recipe I came up with was a mix of tofu, nondairy milk, and tapioca starch (corn starch is a fine substitute). This combo gives the perfect flakiness and color and crunch without that horrible eggy smell, and the cruelty.

But to stuff my vegan Vegetable Frankie, I used a filling that's not typical but mindblowingly delicious and not unlike a saag paner: a mouth-tickling spinach curry with tofu paneer cubes and cherry tomatoes fresh off the vine. You can try all kinds of fillings with this tasty wrap, and I do, but this one is hands-down my favorite -- and a favorite with Jay and Desi.

The tofu I used was the marinated and baked Indian style tofu I shared with you the other day, and it is quite perfect in this dish. The spinach itself requires very little prep: saute some onions and garlic, pour in the pureed spinach with some spices, add the tofu cubes, and you're almost there.

I hope you'll try this recipe, because it's one I know you'll love. I stuff a few raw onions, tomatoes or cucumbers into the Frankie before I roll it up, for more crunch and texture, although you can leave them out if you'd rather. The spinach and tofu filling is sublimely delicious by itself. This is a very lunchbox-friendly recipe, especially for kids.

Here's the recipe now. Eat it, and let it transport you into a magical city, where the food is delicious, the atmosphere is dizzying and the energy is intoxicating. It's a place -- and a treat -- like no other. 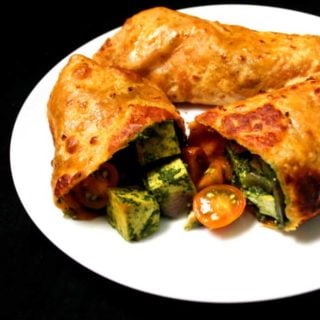 Get the wraps ready: