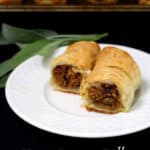 These delicious and easy vegan sausage rolls, with golden, flaky puff pastry enclosing a savory, herby filling, come together in minutes and need just seven ingredients. They make a fun addition to your child's -- or your -- lunchbox, and are soy-free and nut-free.

It's that time of year again: my voicemail box is filling up with back-to-school messages from the school district and my heart's filled with dread and excitement.

Jay begins middle school this year, yikes, can you imagine? He came to us as a six-year-old, barely up to my waist, speaking no English but bright as a penny and gifted with street smarts that helped him quickly settle into an unfamiliar milieu. He started first grade not a month after arriving on U.S. shores, armed with the alphabet and a few basic words and sentences we had managed to cram into his fertile little head in the weeks we'd had him.

Today, on the verge of sixth grade, he's already a strapping 11-year-old who reads nonstop, won't stop telling me facts about jet propellers and car engines that I don't need and am not interested in, and is probably going to make good on his promise of beating my 5 feet four inches within the next year.

Back to school also means I have to start thinking of ways to make attractive, healthy lunchboxes for him that won't go into the bin. Jay is, like any child his age, a moderately fussy eater, although his food habits have improved vastly since he came to us, partly because he's gotten used to the food, and partly because I've refused to give in to every food whim. He has this ability -- and I don't know if it's common to every child or peculiar to him -- of guzzling down vast quantities of food he likes, almost like a wolf, and then eating very little of what he doesn't really care about. Since the pediatrician thinks that's okay because it all balances out, and he's a healthy child, I don't worry about it too much.

But I also don't want him throwing away perfectly good food at school, where I'm not around to keep an eye. So when I make his lunchbox, I try and give a little, by making foods that are healthy but also have elements he loves, like the crunch and flakiness of puff pastry.

During our recent trip to Ireland, our bus made a stop at a gas station convenience store on our way from Dublin to Belfast, where I saw a sign -- in the bathroom -- advertising their vegan sausage roll. I told you guys in my vegan Irish Stew just how vegan-friendly the country is, but even so I was surprised and intrigued. So I got myself a vegan sausage roll.

Jay grabbed it off my hand and ate most of it, it was so good. So as I started thinking up lunchbox ideas for him, this meat-free roll was a no-brainer.

One of the rules of thumb I try to follow when I come up with school lunch recipes is that they have to be -- at least in most cases -- easy enough for a child to make. That's because once the school year is on, there's no time for long, complicated recipes every day. These sausage rolls require just a handful of ingredients, and they take minutes to make.

These meatless sausage rolls are just perfect for a snack or lunch. They are crispy and crunchy and incredibly savory, and I bet you won't be able to stop at one. Neither will your young one. 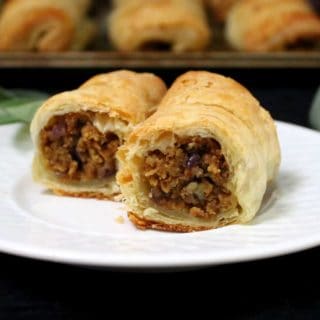