Holy Cow! has a Facebook page meant for those among us who want to let loose on animal rights, animal cuteness, animal smarts, animal cruelty issues and, of course, veganism. This week, I opened what seemed a thought-provoking but harmless enough (or so it seemed) discussion on a recent declaration by actress and famous vegan Alicia Silverstone that when she's at a party and drinking and comes upon a platter of cheese, she gives in to temptation and takes a little bite.

Is that so egregious, I asked?

"To me it sounds like she is being real," said one commenter, Nicole. "It's not like she is living in some vegan nation surrounded only by vegans. Sometimes you are in the real world, in a non-vegan situation and you are hungry and there is no other solid food around."

To which Priya retorted: "When the only options at a gathering are non-vegan, I choose to go hungry because I don't consider animal products "food"... I completely understand that when people are transitioning, they may consume animal products. But don't call yourself a vegan until you stop doing so."

And so on and so forth went the comments, some downright outraged, others not so much.

I wasn't surprised by those who condemned Alicia-- I understand them completely because my first reaction was very similar. We vegans tend to be a pretty ethical lot who firmly believe that it is wrong to contribute, in the smallest way, to animal suffering, and we know that some cow suffered for that teeny bite of cheese. We know we can eat deliciously and healthily without hurting animals, and we spend our lives showing the world that ours is not a difficult choice -- just the intelligent one. Therefore it just follows that those among us who do stray once in a way make us all look like we are just secretly salivating for all that animal food we chose to give up.

Then I got to thinking about Alicia's argument that she's only human, and that she doesn't want to be seen as icy and rigid. But if that is indeed how everyone perceives us vegans-- as unbending and rigid-- maybe we need to do something about changing those perceptions instead of grabbing at the cheese.

To me, that means showing the world how effortless eating vegan is-- and how delicious. But it also means not making it appear that veganism is an enclave where a few of us exist in ethical splendor and no one who strays even a tiny bit is welcome.

When I go out to eat with non-vegan friends, I try not to make a big deal about finding a place with a large vegan menu, because I know I'll find something delicious I can eat at almost any restaurant. I'll order the veggie burger without cheese and mayo, for instance, but I won't quiz the waiter on every last ingredient in the bun. When my non-vegan friends take a bite of the food, they're surprised at how delicious it is. I've noticed now that more of my friends tend to order vegetarian food when they go out because they don't think it's the hardest thing in the world, and also because they know it is delicious. Most people, I think, by now have a good idea about the tough lives of animals raised for food, and they are willing to try and do their bit. And that, in my opinion, counts.

Along the same vein, I try to share healthy and delicious recipes with you on this blog, many of them animal-free versions of traditional favorites. Among my readers are many carnivores who have written to me saying they enjoy making these recipes for family or friends who are vegetarian, or for their own health. Although they are not about to give up their animal-based diet completely, it makes me happy that they do see the value and deliciousness of a vegan meal, and make a difference to the animals -- however small--with that one meal.

So let's stop beating up on Alicia and any vegan out there who makes an occasional choice to eat dairy or another animal product. As long as they remain committed to a cruelty-free lifestyle for the most part, they are still making a positive difference and they deserve credit for it.

What do you think?

Come fall, there's bound to appear-- on almost every food blog-- a recipe for butternut squash soup. It's easy to see why, given that this is the season when squashes of all sizes and shapes start putting in an appearance in the markets. Besides, there's just something about fall that makes one crave warm, soothing, orange soups.

I love cinnamon and the thought of marrying velvety-sweet squash and warm, spicy cinnamon made my tastebuds want to sing.

Luckily I had a butternut squash sitting in my kitchen (they last for weeks at room temperature). Once I'd gone through the tough job of peeling and chopping up the squash the rest of the soup was breezily easy to put together.

Here's the recipe. Serve it with some warm, wholegrain croutons and some avocado salad on the side and then go snuggle in bed under the warm covers. 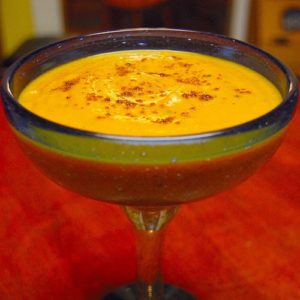