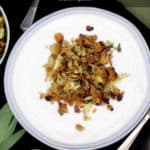 Make this creamy vegan Cauliflower soup with a crunchy and herby breadcrumb topping to satisfy that urge for something warm and comforting in your belly as the leaves turn brown and the weather begins to bite.

Creamy soups (like this amazing vegan cream of mushroom soup) are my thing, and this ultra comforting and creamy vegan Cauliflower Soup has gone to the top of my favorites.

Winter cooking to me is all about foods that feel warm and cozy on the inside, and they don't all have to include pumpkin or pumpkin spice or some variation thereof. (No offence, punkin.)

And while the warmth of a kitchen can be welcome in fall and winter, recipes I can accomplish in minutes -- or that are mostly hands-off -- are still very much my preference, because who has the time?

The great thing about this creamy vegan Cauliflower Soup is that it needs just five ingredients. And what is even more amazing is the crunchy breadcrumb topping that goes on top of it. I got that idea from Jamie Oliver who used it in a cauliflower pasta recipe, and it tastes so good, you will be licking the bowl. Maybe the pot too.

What we love about this recipe 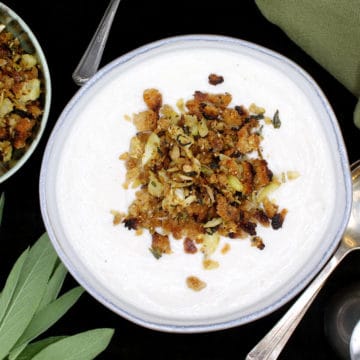 For the crunchy breadcrumb topping