You are here: Home | Dinner | Vegan Red Beans and Rice

My vegan Red Beans and Rice are a meatless but just-as-comforting version of this Louisiana comfort food classic. I'll show you how to pack in so much authentic taste and richness, you'll be licking your bowl. Soy-free and nut-free recipe, can be gluten-free.

The words, "Red Beans and Rice," conjure up a hearty bowl of deliciousness, no matter how much or how little you know about this quintessentially Lousiana recipe.

This is the best sort of comfort food with rather humble origins. The story goes that red beans and rice were made on Mondays by cooks in Lousiana looking for an easy, hands-off recipe that would use up leftover ingredients from Sunday supper, like beans, veggies and pork.

So you can see that traditionally, despite the promising name, this is not a vegan or vegetarian dish.

Versions of this recipe typically use ingredients like bacon, tasso (a pickled ham), and andouille sausage for flavor. Now that's a lot of meat in one dish, so veganizing it definitely requires some thoughtful substitution.

I often say this and it bears repeating, that when you veganize foods, don't just take out the non-vegan ingredients. Meat is a strong flavoring agent and it has that elusive umami. So if you just take the meat out your dish is going to taste flat-- unless you susbtitute intelligently.

I did quite a bit of research for this vegan red beans and rice recipe to make it as authentic and traditional as possible, and got some really good ideas from the experts at America's Test Kitchen (their recipe is not remotely vegan, though). In the end, I think I succeeded in creating a really delicious dish you will not miss the meat in.

What we love about this recipe

Tips for making the best vegan red beans and rice

Can I make this recipe oil-free? 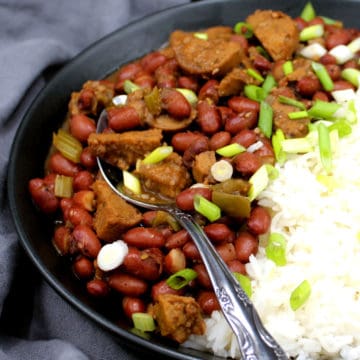 Vaishali · Holy Cow! Vegan Recipes
Red Beans and Rice are a Louisiana comfort food classic. This vegan version has all of the flavor without the meat, and I'll show you how to pack in so much authentic taste and richness, you'll be licking your bowl. Soy-free and nut-free recipe, can be gluten-free.
5 from 4 votes
Print Recipe Pin Recipe
Prep Time 15 mins
Cook Time 1 hr 15 mins
Brining time (optional, can do quick brine) 8 hrs
Course Main Course
Cuisine Louisiana, nut-free, Soy-free
Servings 8 servings
Calories 393 kcal

For the red beans:

For the red beans spice mix: