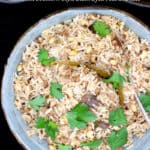 A new year brings with it hope and...perhaps a little luck? Make sure yours gets off to a great start with this classic Southern recipe for a vegan Hoppin' John--a savory, sumptuous preparation of black-eyed peas and rice that's typically eaten for good luck as the calendar turns. This recipe is also gluten-free and nut-free.

I am serving you today the first of three classic Southern American recipes that you absolutely want to eat this New Year's, whether you're superstitious or not.

Beginning with this savory, flavorful vegan Hoppin' John, a quirkily named black-eyed peas and rice dish that will leave you feeling both good and lucky.

What is Hoppin' John?

A Hoppin' John is a rice and bean dish, usually with some pork/bacon thrown in, from the American south. It is often eaten on New Year's Day, for luck.
With a name so eccentric, there are all sorts of fables spun around why it's called a Hoppin' John, including a rather artless one about a man named John who hobbled around the streets of Charleston selling peas and rice.
But the explanation most agree on is that it is a corruption of pois de pigeons, the French term for black-eyed peas (also called pigeon peas). Which, when you say pois de pigeons out loud in your best French accent, does sound very plausible. Try it.

Different cultures have long associated certain foods with luck, especially around new year's when we all naturally feel entitled to some good fortune. Like most superstitions, the reasons why these foods and not others are chosen can be vague and even simplistic.
The Chinese eat long noodles for longevity. The Italians eat lentils--shaped like coins-- for prosperity. And American southerners eat black eyed peas--cool little guys, each tainted with a black eye--on a bed of collard greens because, apparently, they look like coins on dollar bills. Go figure.
Some stories, however, date the legend of the black-eyed peas all the way back to ancient Egypt where they were eaten to show humility to the gods.
Whatever the superstition, and whether or not you buy it, the fact is that you can't go wrong eating black eyed peas and collard greens. Both are extremely healthy foods that will leave you feeling--and looking--like a million dollars. And that's always a lucky thing to happen. 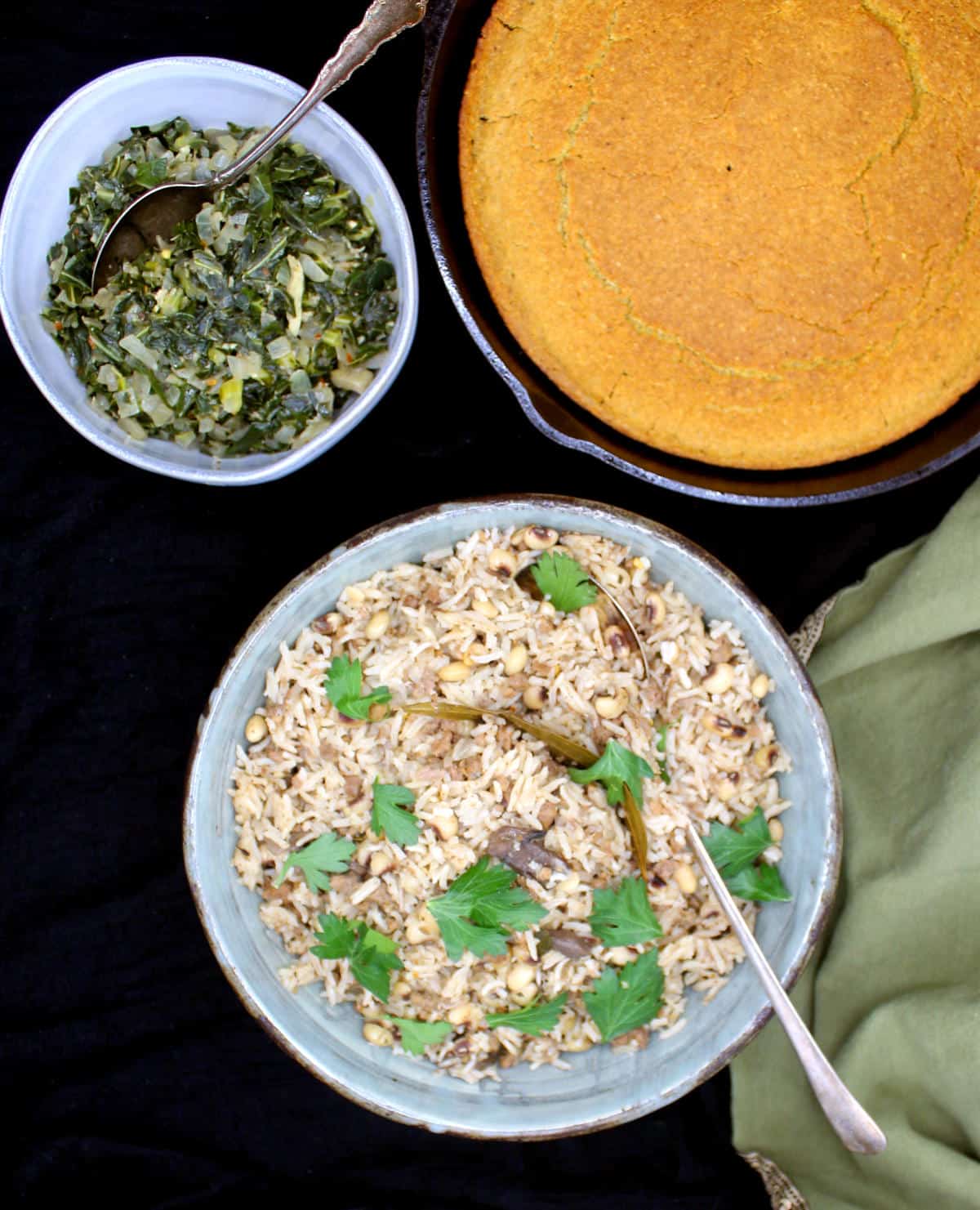 Tips for making an authentic but vegan Hoppin' John

Veganizing this dish can be easier than you think because the two foundational elements--rice and beans--are both plant-based with the meat being more of a flavoring agent.
But. You hear me say this often enough on this blog and it's worth repeating that you cannot take away ingredients from a meat-based dish and expect it to taste as good, because meat contributes umami, that hard-to-replace fifth flavor that makes an eater go yummm.
So when you remove meat, substitute thoughtfully and meaningfully to ensure you put back all of that flavor you just took away.
I used a handful of mushrooms---a mix of crimini and shiitake mushrooms, although one or the other is fine. Mushrooms are meaty and have great umami, and they add some meatiness back into this dish while keeping everything strictly plant-based. I also use a good, homemade vegetable stock to cook the rice and peas, and a couple of herbs--thyme and sage. Finally, a couple of tablespoons of soy sauce add a really nice depth of flavor, although if you want to stay soy-free, leave it out.
I used vegan meat--a 12 oz pack of Impossible burger--because my 12-year-old is more likely to love a food and eat it when there's a meat substitute involved, and I wasn't wrong. You can leave it out if you want to keep all processed foods out and there will be no compromise to the flavor.

Canned or dry black-eyed peas, which is better?

I don't really have a preference for this dish, you can use either. Using canned, of course, makes the process much shorter because if you start out with dry black-eyed peas you will need to cook them until they're tender. If you do start out with dry peas, try and soak them for a few hours--overnight if possible--before cooking them on the stovetop or in an Instant Pot.
When I made this recipe this time I actually used frozen black-eyed peas that I get from the freezer section of my supermarket. I like using these because they cook faster than dry peas and keep forever in the freezer.

What to serve this with

A Hoppin' John is traditionally eaten with collard greens and cornbread (because it looks like gold, got it?). I have for you delicious recipes for vegan collard greens and vegan corn bread that I'm sharing with you in my next two posts so you can have it all in time for New Year's. 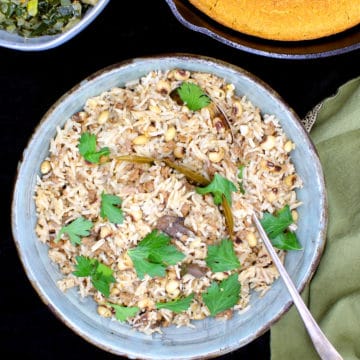