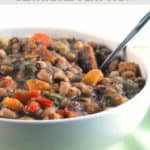 This vegan Caribbean Black Eyed Peas Stew has a ton of veggies, including carrots and potatoes, and it is spiced up with hot scotch bonnet peppers. A vegan, soy-free, nut-free and gluten-free recipe.

So I am up to my eyeballs in a dreadful, miserable, head-numbing cold that just refuses to go away. But it's exactly at times like these that I start dreaming of spicy, hot, steaming bowls of stew, like this Caribbean Black Eyed Peas Stew.

I am a true fan of Caribbean cuisine. I could eat Trinidadian rotis stuffed with split peas and this Vegan Caribbean Bowl for my last meal, and just about every day before that. And black-eyed peas are one of my most favorite denizens of beanworld. Partly because they're so delicious and creamy, but also because I love me a rebel that wants to be called a pea when it's really a bean.

This is a versatile recipe. You can chop up all sorts of veggies into it, especially root vegetables which go perfectly with the spicy kick and the tender peas. I used sweet potatoes and carrots and potatoes, but I also added in some red peppers. Yummy yum.

One of the elements that adds vast amounts of flavor to this recipe is the pepper: a scotch bonnet pepper, a common ingredient in Caribbean cuisine. This is a round little pepper very similar in looks and flavor to a habanero, with tons of smoky flavor. If you can't find a scotch bonnet, use a habanero instead.

This is very much a kid-friendly recipe if you have a kid who appreciates spice. There's tons of flavor here, and see how pretty that stew is with all those colorful veggies? I can't think of anything I'd rather have right now to clear my head. Off I go to ladle out a bowlful.

If you are starting out with dried black-eyed peas, which I highly recommend, make sure you check out my post on how to cook perfect black-eyed peas. 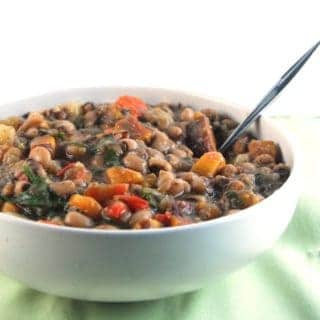