These Trinidadian rotis stuffed with split peas are not only exotic and delicious, they are also very well balanced nutritionally. The lentils and wheat together form a perfect protein, which is great for anyone looking to eat healthy.

I was visiting yesterday with my friend Roshani and we got to talking about Trinidadian food. Before long, I had a serious craving for something hot and spicy and Caribbean.

By the time I got home, the thing uppermost in my mind was to get into the kitchen and make something divinely Trinidadian.

I was in luck. My favorite cookbook, Madhur Jaffrey's World Vegetarian, had quite a few choices. What I really wanted to make was Doubles, the dish Roshani had been raving about and which is a fried bread topped with a spicy chickpea stew and mango chutney. But I settled instead on a healthier choice that required no deep-frying: a Trinidadian roti or a flatbread stuffed with a spicy lentil mixture.

I don't easily change other cooks' recipes the first time I make them because hey, how could I improvise on something when I don't know if the original tastes better? In fact, the only reason I do make changes when I cook a recipe for the first time is when I need to veganize it because this is, after all, a vegan blog, or to make a recipe healthier, or when I don't have the exact ingredients on hand.

I did healthify Jaffrey's recipe: for the Trinidadian roti, I cut down on the fat, used canola oil instead of butter (a much healthier alternative), and I substituted whole-wheat durum flour for the all-purpose. I didn't make any changes to the stuffing, however, which was delicious except--again--to cut down on the fat.

The great thing about these breads is not only are they exotic and delicious, but they are also very well balanced nutritionally-- the lentils and wheat together form a perfect protein, which is great for anyone looking to eat healthy. I served this with a gorgeous Green Beans and Potato Curry with Trinidadian Spices, and I'll be posting that recipe tomorrow.

Here, then, is the recipe for Trinidadian roti. The process for making the stuffed bread is very similar to the way we Indians make parathas, but I included some additional pictures to demystify the process. 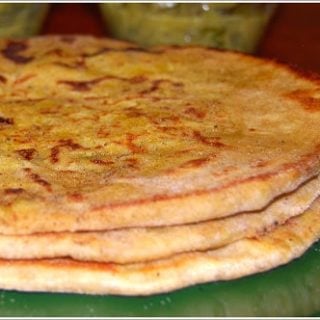 For the split peas stuffing

Put the rotis together:

Serve these Trinidadian rotis with a Green Beans and Potato Curry with Trini spices.