This Nepalese Tempeh Choila, a vegan take on a popular Nepalese dish that usually contains meat, is spicy and fresh and plays well both as an appetizer, or a stuffing for tacos and rotis. Recipe takes under 20 minutes and is gluten-free and nut-free.

Nepalese cuisine has echoes of the cuisine of its mammoth neighbor, India, which is why you'll often find it served alongside Indian cuisine at restaurants. But for the adventurous and the enthusiastic, there are plenty of recipes that stand apart on their own, like Choila, a salad of vegetables mixed with broiled or boiled meat and tempered with simple spices.

What I love most about the Choila is its stark freshness. It's like biting into summer, with the sparkling flavors of lemon, onions, scallions and tomatoes dancing on your tastebuds. The tempeh, which I marinate in lemon and pepper and broil, adds more delicious flavor and texture.

But the best part of the Choila has got to be the tempering: fenugreek and turmeric. These two rather bitter spices, when fried in a little oil and then mixed with the other ingredients, add a sharp burst of flavor. I use fenugreek seeds often in my kitchen, but I was surprised by the technique used here: the fenugreek seeds are blackened before being added to the veggies. While you'd think this would make them even more bitter, the blackening actually appears to mellow down the bitterness and the seeds add a welcome and surprising crunch that's quite wonderful.

My Nepalese Tempeh Choila is not by any means claiming to be a traditional recipe, and I believe there are a million ways to make this dish, but I can promise you this: it's delicious, appetizing, and it is a recipe I'll be making again and again in my kitchen. 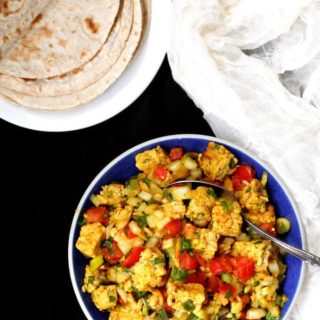 *I like layering the Nepalese Tempeh Choila into rotis or tacos with greens for a quick breakfast or lunch. You can also serve it as an appetizer.