Jump to Recipe Pin Recipe
This indulgent, low-fat Mushroom Biryani makes for the perfect weekend -- or weeknight -- dinner. All you need to go with it is a vegan raita, like my soy-free Cucumber Raita. A gluten-free, soy-free recipe.

The other day, as the fragrance of my easy and quick Mushroom Biryani filled the kitchen, I was back for a moment in my aunt's kitchen in Bombay.

Akka, my dad's sister in whose home in Vile Parle, Bombay, I spent many wonderful summers as a girl, was at the stove, frying up the onions for her mutton biryani in a small Indian wok, known as a kadhai. My cousin Tai was sitting on the cold, red, cement-tiled floor at an adoli, a cutting implement often used in Indian homes instead of a knife, cutting coriander leaves into lacy fronds with a deftness I have never mastered. A plane closing in to land at the Santa Cruz airport just a couple of miles away drowned out, for a moment, the sounds of gods alternately battling and pontificating on my uncle's favorite Sunday morning television show, Mahabharat.

If my cousin Deepa, Akka's daughter who was several years older and already married, happened to be staying with her at the time, there was more fun to have by way of food. Deepa was an innovative cook, and watching her experiment in the kitchen perhaps laid the foundation for the experimenting I was to do on my own, once I started to cook myself. Unlike Akka, who was a tremendous cook but who stuck with traditional recipes handed down by her mother, Deepa, who had married outside the Konkani clan into a Gujarati household, and who was also a great cook, would often fuse recipes from the two cultures she straddled. She also ventured into what appeared, at that time, rather exotic recipes -- everything from a Chicken Paratha to a Mushroom Biryani.

Akka passed away a few years back, and it's been more than a year since I've physically been back in Bombay. But the food I cook in my kitchen often takes me back, like a time machine, to her and to Deepa and into other long-lost corners of the past.

The Mushroom Biryani I have for you today is not particularly inspired by Deepa's version, which I never learned, but you can see why it is a dish I love so much. My version, in addition to being vegetarian, as the name suggests, is also vegan, because I make it without any yogurt, an essential ingredient in biryani. Instead, I use a quick-blended version of "cashew yogurt", which involves blitzing some raw cashews with lemon into a smooth paste. This yogurt stands in admirably for its non-vegan counterpart, and tastes better because it adds richness to this otherwise spare recipe.

So here's the recipe for an easy, low-fat, vegan Mushroom Biryani, a flavorful, delicious, and vegan treat for any weeknight or weekend meal. It is good enough to mark one of life's milestones, or make a memory of your own. 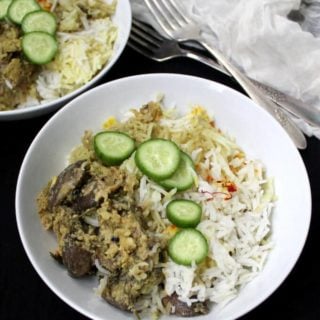