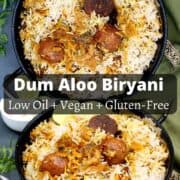 If juicy, spongy, flavor-soaked potatoes in a creamy yogurt gravy topped with savory rice sound like your kinda eats, you gotta try this vegan Dum Aloo Biryani. It combines two well loved Indian restaurant-style dishes into one flavor-packed -- and healthy -- recipe and it takes just minutes to put together.

I have said this before but it bears repeating: contrary to what you might have been led to believe, a biryani is one of the easiest Indian dishes you can make. Weeknight easy.

You don't have to slog hours over a slow fire to make a delicious biryani. As I showed you in my vegetable biryani recipe, a quick and tasty biryani is very possible using some clever, but not strenuous, multitasking.

And, of course, as you already know if you love Indian food, a biryani is one of the most rewarding dishes you can make: it infuses you, the cook, with a deep sense of satisfaction, and your eaters with awe at this incredible food you just cooked up that they can't get enough of.

For this healthy vegan Dum Aloo Biryani, I combined two of the tastiest Indian dishes: Kashmiri Dum Aloo, a delicious concoction of baby potatoes in a creamy orange fennel and yogurt gravy, and a vegetable biryani.

As disparate as these two dishes sound, they do have a lot in common. Both traditional biryanis and dum aloo are Mughlai dishes, legacies of Muslim invaders who arrived in India hundreds of years ago and helped create a cuisine that was decadently rich and flavorful: a cuisine fit for kings. They are both cooked in the "dum" style, where the ingredients are placed in a sealed pot and allowed to cook over a slow fire so they steam together, absorbing each other's flavors. And a biryani uses many of the same ingredients that a dum aloo does, including yogurt and spices.

There's one more wonderful thing about my dum aloo biryani: I air-fry or bake the potatoes instead of deep-frying them, as is traditionally done. This results in zero loss of taste but it also makes this dish far healthier: rich tasting without the calories. Now that's a win-win.

How to make Dum Aloo Biryani

Is a dum aloo biryani the same as an aloo dum biryani?

An aloo dum biryani is made with potatoes, but it has more of a traditional style biryani gravy. The reason it's called an aloo dum biryani is because it uses the dum style of cooking the ingredients, sealed, in a single pot.
A dum aloo biryani, on the other hand, uses a dum aloo gravy made in the Kashmiri dum aloo style, so it has very different flavors.

Yes, and you can definitely do so, but I am a big believer in leaving potato skins intact when possible because most of the nutrition in a potato lies right under the skin and when you peel them you discard that nutrition with the skin. Baby potatoes are thin skinned and I find that it makes absolutely no difference to the final dish when you leave the skins on.

Why do I need to prick the potatoes all over? Can I skip this step?

The potatoes are pricked all over with a toothpick (or fork) so when they cook in the yogurt gravy they soak in all that goodness and turn marvelously spongy and flavorful. It takes just a few additional minutes so don't skip this step. You can always get the kids to help you out!

Did you forget to add garlic?

Good question! I love garlic and you've probably never seen a biryani recipe from me before that didn't feature this amazing ingredient alongside ginger. But you don't need garlic in a dum aloo gravy, and you don't need it in this biryani. It's just as tasty without. 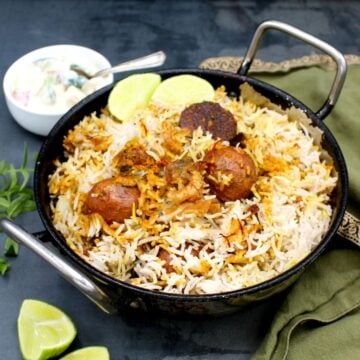 For the biryani rice

For the dum aloo gravy

For topping the biryani

Put the biryani together