Keema, in Hindi, is ground meat of any kind, and it usually gets added into all kinds of savory and delicious Indian curries and rice dishes. My vegan and meatless version of Keema Biryani stays true to tradition and taste, but it's so easy to make, you could even pull it off for a weeknight dinner! A vegan, soy-free, nut-free and gluten-free recipe.

You know I only share with you recipes that my family loves, and today I have for you one they not only love, but one they crave. A sumptuous, appetizing Vegan Keema Biryani.

Most of us vegans were either once carnivores themselves, or we live with someone who is. As someone who belongs to both groups, I love it when I come up with a great recipe that tastes like the real thing and satisfies everyone's tastebuds, without the animal stuff.

This Keema Biryani certainly checks all those boxes. If you love a hearty rice dish, this is a great variation on the biryani you might already be familiar with, which uses whole meats (or tofu or vegetables, if you're vegan). Only, this version is even better. If you have an omnivore in your life, or are even just trying to eat more plant-based meals, give it a try.

What you'll love about this recipe:

How to make biryani rice

Which meatless meat should I use for the "keema"?

In India, since the politically motivated ban on beef, keema usually refers to ground goat or chicken meat, and most recipes cooked there would use one of these two types of meat. I've tried this recipe with different plant-based meats to get an authentic flavor, and the winner, for me, is Beyond Beef. It has the right flavor to substitute for the actual meat, but more importantly, it tends to be fattier than other meat substitutes, so the biryani remains moist and luscious. That said, you can use another ground meat substitute with good results.

What to serve with biryani 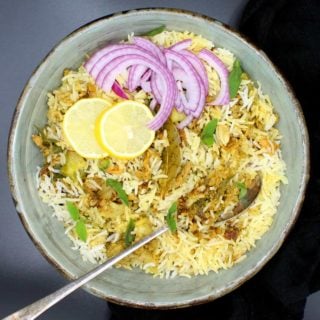 For the biryani masala: