This easy and healthy Indian curry is a breeze to make. It's spicy and one-pot and it's packed with veggies and good protein from vegan meat mince or "keema" (you can sub with lentils). It takes under 30 minutes from scratch, which also makes it a perfect fit for a weeknight. Serve it with basmati rice, vegan naan or roti.

Curries like these which are spicy, tasty and packed with nutrition are my go-to meals for weeknight dinners. They are certain to please everyone, and they give me an opportunity to use up all those veggies hanging out in the refrigerator before I have to send them into the compost pile.

If you love eating Indian food but are intimidated by the idea of cooking it, you should try this recipe for sure. It's beginner-level easy, and it'll leave you excited about trying out more Indian style recipes. And what an adventure that'll be!

I called it an "Indian curry" although there really is nothing like that, because I wasn't being loyal to any single one of the many Indian cuisines when I made this. But if I had to, I'd put it in the north Indian bracket because of the spices I used.

The complexity in this recipe comes from a spice mix that's called kitchen king masala, which I buy online or pick up at the Indian grocery store. Do let me know if you love this recipe. And if you love vegan meat in curry sauces, be sure to try this pumpkin curry recipe!

What is kitchen king masala?

A relatively recent addition to India's vast smorgasbord of spice mixes, the kitchen king masala is an all-purpose spice blend. I hadn't heard of it until I came across it at the Indian grocery store a couple of years back and bought it on a whim. I really liked it, and I use it often now. It has some elements of garam masala with additional ingredients like fenugreek seeds, poppy seeds, ginger powder and mustard powder (although ingredients can vary by brand).

I most often use it in curries, both wet and dry, and it adds a restaurant-like flair and finish to the dish, as well as a really appetizing fragrance.

If you don't want to buy it, or can't find it, just use a good garam masala blend.

In the context of Indian food, "mince" or "keema" refers, usually, to mutton or goat meat that's been ground. Before a politically motivated ban on beef was imposed on most Indian states, it also included ground beef.

Keema is used in tons of tasty Indian recipes, and I've already shared with you my recipe for a dry vegan keema masala, to scoop up with rotis and naans. You can also use it to stuff pastries called keema samosas, and in our home we love a vegan version of keema biryani.

I usually use something like Beyond Beef or Impossible Burger in these recipes to stand in for the keema. This time, I used the Beyond Sausage, crumbled up into bits. 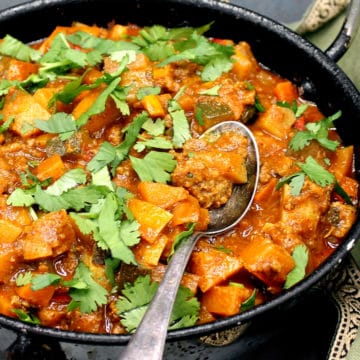 Indian Curry with Mince and Veggies

This easy and healthy Indian curry is a breeze to make. It's spicy and one-pot and it's packed with veggies and good protein from vegan meat mince of "keema" (you can sub with lentils). It takes under 30 minutes from scratch, which also makes it a perfect fit for a weeknight. Serve it with rice, naan or roti.
5 from 5 votes
Print Recipe Review Recipe
Course: Main Course/Curry
Cuisine: Indian
Diet: Gluten Free, Vegan, Vegetarian
Prep Time: 15 mins
Cook Time: 30 mins
Servings: 8 servings
Calories: 182kcal
Author: Vaishali · Holy Cow Vegan