These vegan Momos, traditional Tibetan dumplings that look like little purses, are stuffed with artichoke hearts, mushrooms, carrots, bell peppers and onions. This is a perfect appetizer, and it makes for a great snack too. A vegan, nut-free, soy-free recipe.

High on the roof of the world, where they were born, Momos are fat little dumplings stuffed with yak meat and vegetables. But today, for you, I have a seasonal -- and vegan -- version with one of my most favorite flavors in the world: artichoke hearts.

My memories of eating great Momos are tied with Ladakh, an enchanting region nestled high in the Himalayas in the Indian state of Jammu and Kashmir. Ladakh is dotted -- rather paradoxically -- by Buddhist monks and the Indian military, both as a result of its strategic location: it sits smack-dab next to Tibet and, therefore, China, which has a long-running border dispute with India.

Ladakh's beauty is overwhelming -- and does a better job of sucking the air out of your lungs than even the dizzying altitude can. The drama begins even as the tiny plane wings its way precariously between the craggy mountains to the small, rustic-looking airport. Once you touch land, thousands of feet higher than where you were just an hour ago, you are surrounded by snow-capped Himalayan peaks. The landscape, in shades of black, white and brown, is stark and barren. Here and there a lake or a river startles you with a vivid, jewel-like blue or green. Monasteries and palaces are stacked almost haphazardly along the mountainsides.

Our hotel was in Leh, the largest town in Ladakh. During the day we'd take off in a car with a local driver who could expertly negotiate hairpin bends in the narrow, Himalayan roads, driving even higher than we already were to places like Pangong Tso, an ethereal lake that straddles India and Tibet. In the evenings, we'd walk down to the buzzing street market in Leh. We were always followed by one or more of the dozens of stray dogs who lived along the route --friendly creatures looking for some food. They'd bond with us immediately, eager for a friendly pat on the back and for anything you had to give. Once at the market, they'd try their luck with the food vendors -- many of them Tibetan exiles -- selling bread rolls, momos, lassi and salt tea.

Desi and I do not eat street food while traveling in India (a lesson I learned the hard way during my first trip back after we had moved to the United States-- I was determined that as a native Bombay girl, my belly could stand anything. I was wrong). But we were lucky enough to have a Tibetan cook at our hotel who made Momos and other Tibetan foods for us. The momos were delicious-- juicy and succulent -- and I was hooked.

For my vegan Momos Stuffed with Artichoke Hearts, I followed the traditional style of making these little dumplings to the T. If you've never made these-- or any kind of dumplings -- before, don't panic. Momos are surprisingly easy to make, and chances that you will mess them up range from zero to none. The only technique you need to exercise is when you seal up the dumplings, and so long as you get an airtight seal, who cares how perfect they look? Trust me, you'll get better with practice.

Besides the artichoke hearts, I added a number of other veggies into the mix - onions, mushrooms, green peppers, carrots and spring onion greens. The momos themselves are minimally seasoned, ceding flavor to the red sauce that usually accompanies them. There are many versions of this sauce, but mine I made with roasted tomatoes and roasted garlic. It was mindblowingly good.

So here they are, my vegan Momos with Artichoke Hearts. You'll love 'em. 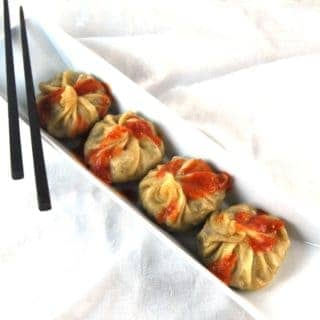 For the momo stuffing:

For the red sauce: