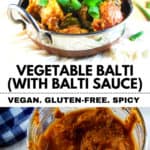 A delectable vegan Vegetable Balti, packed with veggies like onions, scallions, red peppers, potatoes and mushrooms. Mix it all up with a flavorful balti sauce that you can make ahead and store.

So what would you rather hear first: how to make this tantalizing recipe for Vegetable Balti, or the story of the day I was stood up by Britain's curry king?

Okay, well, I know it's the Balti you want, but I'd rather tell you the other one. 🙂 Early in my career, while still working in India, I won a scholarship to work at The Daily Telegraph in London.  To a green-behind-the-ears reporter, it was an exciting time. I had a huge house to myself on the Eastside, right on the river Thames. Every morning I'd walk down a mile or so to the tall, cone-roofed glass building in Canary Wharf where the offices of The Telegraph were, and tackle assignments that ranged from a fire at Sir Andrew Lloyd Weber's stables to writing about a runaway teen who was always being found by police in foreign countries to zipping around the Thames at a press conference on a boat trying to interview Maurice Saatchi.

In the middle of all this, my editor at the newspaper I worked for back home in India dropped what seemed a fun assignment in my lap: she wanted me to write the story of Gulam Noon, the man almost synonymous with Indian cuisine in Britain.

Noon, called Britain's curry king, is known for his packaged curries sold in supermarkets all over the country, and for his Bombay Brasserie restaurant in upscale Kensington. He is originally from Bombay, my home city, and I was rather looking forward to meeting him.

I managed to track down his phone number with some help from another reporter at the Telegraph. He promised an interview, in person, at the Bombay Brasserie the next day.

It took me the better part of an hour, and two tube transfers, to make my way from the Dockyards to central London, but I was  there on the dot. Someone showed me into the restaurant which had closed after lunch. All around me people -- most of them in white -- buzzed, cooking, cleaning, getting ready for dinner. A woman someone introduced to me as Noon's daughter told me she expected her father soon.

Soon turned to never. I waited, and waited, and waited. Noon, they told me, had been called away to another appointment and was not going to make it after all. I was leaving to return to India later the same week, so my story was never to be.

Just like that date with the curry king, the rest of my experience with Indian cuisine in Britain was not a pleasant one. Indian food in Britain, for those of you who've never had it, is quite a different animal from Indian food anywhere else in the world, and can, to Indian tastebuds at least, appear bland. Immigrants from the subcontinent have, over the centuries, adapted ingredients from their motherland to local tastes. In the process, they created recipes and whole cuisines that sound as if they spawn from the Indian subcontinent, but are uniquely British, like tikka masala, curry powder, and Balti.

Balti cuisine is said to have originated in a Pakistani restaurant in Birmingham, that hotbed of south Asian culture in Britain, sometime in the 1970s. It draws sneers from the high priests of Indian cuisine in Britain, but its popularity endures, a testament, perhaps, to the fact that those who love to eat care less for a pedigree and more for flavor. And Balti certainly has that, more so than most British Indian dishes.

Part of the reason why Balti is reviled is the strange technique used to cook it-- strange to Indian and Pakistani cuisine, that is -- stir-fry. It's hard, Indian chefs would argue, to stir-fry Indian meat dishes, because cooking over high heat is horrible for the spices which will burn, and there is really no time for the chunks of meat to cook.

While that may be true, the technique does work rather well with vegetables. Especially those that do beautifully over high heat. Balti, which translates to bucket in Hindi, is so called because it's always cooked -- and served -- in an Indian wok, called a karahi or kadhai, which kinda resembles a bucket. If you don't have one, use a Chinese wok, which will do the job just beautifully, or a large saucepan.

You will find recipes for dry Balti spice mixes, but I really recommend going with a sauce which works better with the stir-frying technique.  The liquid in the sauce gives the spices enough time to cook before they can burn. 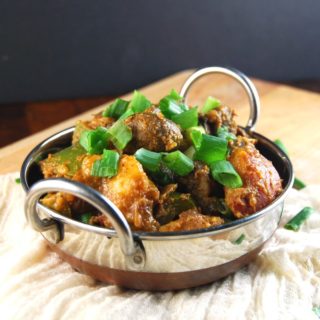 For the balti sauce