We had a lovely, cool evening in the Washington area on Thursday, on the heels of what seemed like one endless, sweltering, humid ordeal. Opie walked longer than he has in weeks now -- his walks are more like "sits"  -- and Jay was only half-drenched in sweat when he joined me after playing with his friend next door. We even ran into a neighbor who was out for a walk in her winter coat.

It's nearing the mid-point of September, and I don't know about you, but I am ready for Fall. I am ready for the trees to turn pink and red and yellow and orange. I am ready for cozy sweaters, snuggling under the covers after the alarm has gone off, and for the already-limp flowers to go to sleep. I am ready for Halloween and Vegan Pumpkin Cheesecake Cupcakes and for turning on the oven full-blast to bake up some breads and pies and cakes.

Jay's theory is that summer is "the favorite season of all people, and winter is the favorite of all dogs." He must be a dog because he can't wait for winter and the snow and to get his sled out.

As the weather gets gentler, one of my favorite foods, pasta, appears more and more often in our kitchen: pasta. Especially pasta with lots of veggies and a meaty, hearty sauce that I can really sink my teeth into.

I had picked up a packet of soy chorizo on a trip to Trader Joe's the other day, and I planned on making a pasta that would pack in the protein and the veggies and taste fabulous while doing all that. Ergo, my Farfalle with Chorizo and Veggies.

This pasta also was, really, an excuse to clear out the refrigerator of assorted bits of vegetables. A handful of greens, half an onion, frozen green beans (a must-have in my kitchen), mushrooms that were begging to be eaten before they went belly up, a couple of tomatoes going just a little soft around the middle...everyone was invited to the party. And they made it rock.

Farfalle with Vegan Chorizo and Veggies 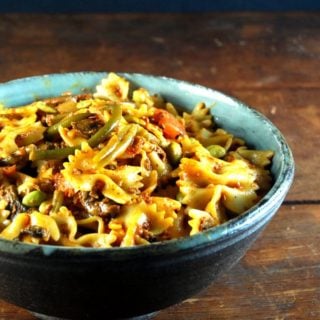 Farfalle with Vegan Chorizo and Veggies