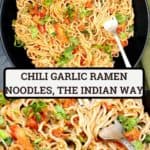 These vegan Instant Chili Garlic Ramen Noodles take 15 minutes to pull together from scratch and they are a certain kid favorite. I make these with brown rice ramen, so they're gluten-free, but regular ramen noodles are fine--just read labels to make sure they are vegan and toss the flavor packets. Then you can control how much salt and flavoring you add.

Ramen was India's first taste of instant food. In a culture where women were expected to cook every meal from scratch, Maggi noodles, the first brand marketed in the country in the '80s, became an instant hit with kids. A big reason for this was that Nestle, the company that owns the brand, went ruthlessly after its key demographic with bright, vibrant ads of happy children thumping forks on tables demanding Maggi. The moms, Cheshire cat smiles on faces, appeased them with the magic words: "just two minutes."

Unabashed marketing aside, the charm of Maggi noodles lay in the fact that they were eminently customizable. You could tailor them to whatever your kids' favorite flavors were. You could douse them in ketchup, toss in peas or peanuts, saute them with onions, or any number of things. One thing you could be certain of: they would taste amazing.

Decades later the popularity of ramen noodles has not abated in India and they have even made their way into the country's street food stalls and restaurants, where they are served in a multitude of ways, from ramen pizzas to ramen bhel.

Like so many Indians who grew up with Maggi, ramen noodles have always had a special place in my heart. I know they are not really healthy, I know they are rarely vegan here in the United States, but I tossed out the flavor packets, read labels, and worked to fit them into my dinner routine once in a while.

Now, my son, Jay, has developed a love for these squiggly, wiggly noodles, and like those "two-minute" moms I find myself rushing to oblige, probably with a smug smile on my face.

A big reason for this is that I buy a big bag of brown rice ramen bricks that have no added salt and no flavor packets, and I can customize them--healthily--to my heart's content. And Jay is none the wiser.

One of his, and my, favorite dinners in a rush are these Chili Garlic Instant Ramen Noodles made the Indian way.

They are super simple, needing just 10 to 15 minutes, tops, to pull together. But they are not your college microwave dinner. These are vibrant and delicious and you can make them as nutritious as you want by tossing in quick-cooking veggies like zucchini, tomatoes, green peas, bell peppers and scallions. I often stir in edamame for a bit of protein and their crunchy nuttiness is perfect here.

I hope you'll try these the next time you or your kids need a quick dinner that's fun and healthy!

Not all ramen noodles are vegan, so you definitely need to read the labels. It is usually the flavor packets that might contain meat or other seasonings that won't work in a vegan diet, but for this recipe you won't be using those.

According to Peta, Nissin Top Ramen, the most popular brand sold here in the U.S., has two vegan flavors, Soy Sauce and Chili. You can customize my recipe below by skipping the garam masala and using the flavor packets sold with the noodles, but you'd still be faced with the problem of too much salt.

The brand of ramen I buy is sold by Lotus Foods and the one I'm used to is their brown rice ramen, which is made with rice and millet flours and is therefore gluten-free.

Indian seasonings like mustard seeds and garam masala really make the noodles pop, flavor-wise, while also adding some healthfulness. Tomatoes and the slight tanginess they add further enhance the noodles. You can also stir in one or more of the following ingredients: 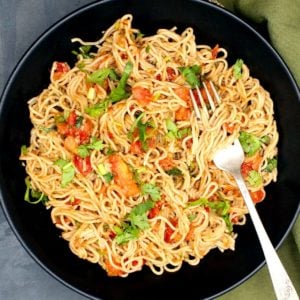 These Instant Chili Garlic Ramen Noodles take 15 minutes to pull together from scratch and they are a certain kid favorite. I make these with brown rice ramen, so they're gluten-free, but regular ramen noodles are fine--just read labels to make sure they are vegan and toss the flavor packets. Then you can control how much salt and flavoring you add.
5 from 4 votes
Print Recipe Review Recipe
Course: Dinner
Cuisine: Indian
Diet: Gluten Free, Vegan, Vegetarian
Prep Time: 5 mins
Cook Time: 10 mins
Total Time: 15 mins
Servings: 8 servings
Calories: 133kcal
Author: Vaishali · Holy Cow Vegan

Optional veggies (chose one or two)