This vegan Kati Roll from the streets of Calcutta has amazing texture and flavor, with baked tofu, and it is packed with veggies including mushrooms, bell peppers, onions and tomatoes.

A Kati Roll is a popular street food from one of my favorite cities on the planet: Calcutta, or Kolkata, as it is now called.

There is something about big, buzzing cities that really appeals to me. And Calcutta, one of India's most crowded and oldest cities, has a million life stories in its narrow, old lanes, its lingering memories of the British colonization of India, and its communist politics that has always set it apart in the world's largest democracy.

I've had a long association with the city. When I lived in Bombay, I worked as a correspondent for Calcutta's biggest daily, The Telegraph. It was an exciting time, and one I've written about before in this Pav Bhaji post, although it was cut short when I moved here to the United States to go to grad school. I actually only visited Calcutta years later, and I found the city to be as wonderful as I had ever imagined it, or even more so. The traffic was overwhelming, the streets nearly as crowded as rush hour in Bombay, and the people friendly and welcoming.

And there was the food.

The cuisine of West Bengal, the state that's home to Calcutta, is well known around India and perhaps the world, but Calcutta has its own specialties, like the Chinese food served at the many restaurants in India's only Chinatown, and dozens of varieties of lipsmacking street food.

One such street food is the Kati Roll, or Kathi Roll.

The Kati Roll is said to have originated at a restaurant in Calcutta, and it is made of a flaky wrap stuffed with spicy kababs cooked on a skewer (a kati). There are many versions of it -- vegetarian and not-- cooked in restaurants, streets and homes across India, and in Bombay, the Frankie -- a popular street food -- bears a close resemblance to a Kati Roll. But today, I am putting my own vegan spin on this Calcutta classic with my Tofu Kati Roll.

For the filling, I baked the tofu until it was really chewy. Then I tossed it with some fresh green bell peppers, mushrooms, onions and tomatoes. A Kati Roll wrap is usually made with refined flour and coated with an egg wash to make it extra flaky. I used whole wheat flour and a tofu-chickpea-flour wash for the crispiness that worked like a charm.

Try it. You will be singing for Joy. 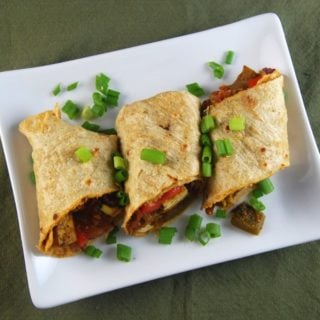