A simple, tasty moong dal dosa makes a perfect and nutritious snack or even an entire meal. Serve with coconut chutney for a memorable meal.

Mount Airy is a gorgeous, sleepy town nestled in the valley of the Blue Ridge Mountains right near where North Carolina meets Virginia.

Once you've driven into town past the inevitable neon-lit fast-food restaurants, gas stations and strip malls, the landscape becomes kinder and gentler. The houses are small, the yards neat, and the streets rolling up and down show off breathtaking views in the distance.

By 5 pm all the shops on Main Street are closed. The only activity and sounds come from a handful of tourists taking pictures of the storefronts of Barney's Cafe, Opie's Candy Shop and Floyd's Barber Shop.

Outside the cafe-- a diner straight from the '60s with the picture of an iconic, bumbling sheriff's deputy displayed large in the window--a sign announces classic southern dishes like chicken and dumplings, sweet potato pie and all sorts of desserts for $2 apiece. A little further down the street are signs telling you where you can find Wally's gas station and the old courthouse.

If Mount Airy is beginning to sound a lot like Mayberry, the fictional town popularized in the Andy Griffith Show, a television sitcom way back from the '60s, you're right on the money. Mount Airy is the place where Andy Griffith was born, and the town that he is supposed to have based Mayberry on. Mount Airy, in turn, seems to be returning the compliment wholeheartedly by modeling itself on its fictional counterpart.

On our road trip this past week, we dropped in on Mount Airy en route from Charlotte, North Carolina, to say a quick "Hey."

Desi and I started watching reruns of this series when we moved to the United States in the 90s. It was easy to sink into the snug comfort of a black-and-white world where everyone knows one another, is nice to each other, helps each other out, and where no problem cannot be solved in 30 minutes. (And now you know why we named one of our dogs Opie, after the character a very young and adorable Ron Howard played in the series :).)

It was late by Mayberry standards when we arrived and all the Mayberry exhibits were closed, but we had a memorable visit nonetheless. Most of the people we met greeted us with a smile, quite unlike us Washingtonians who usually glare at tourists clogging our Metro trains at rush hour. We also stopped by the Andy Griffith Playhouse which was closed, but newspaper clips displayed outside announced the premiere of Griffith's latest movie and recent pictures of the actor visiting his hometown.

Small towns like Mount Airy are often the highlight of our road trips. Often, wrung out by the dreary highways we rely on to take us from one point to another, we stop in for a meal and sometimes for the night in those tiny towns where you can savor a uniquely different flavor of American life.

Sometimes we choose towns because we were charmed by how they looked or sounded on television or in a movie, even one we didn't like, simply because that's how we find out about it. After regretting the time we spent watching Runaway Bride, we still made a stop in Berlin, Maryland, the lovely town not far from Ocean City where it was shot. We've visited Burkittsville, also in Maryland, the wooded, one-road town where the cult classic Blair Witch Project was made. And on a trip through New York state we couldn't resist dropping into Jamestown and Celeron, the neighboring towns where another one of our favorite yesteryear sitcom stars, Lucille Ball, was born and raised. (And yes, Lucy, our other dog, was named after her. You can also guess now who Freddie gets his name from!)

Now on to these Moong Dal Dosas. I love making dosa but I don't do it as often as I'd like to because of the overnight soaking. This dosa requires just a two-hour soak which even I can make time for. And the result is super-delicious and nutritious: since the dosa has both lentils and rice in it, it makes a complete protein. How great is that?

Here's the recipe. Enjoy, everyone! 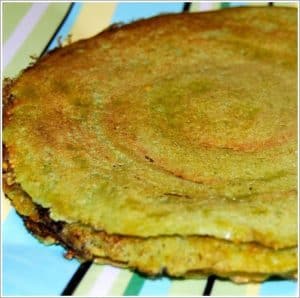 Tip: If you dosas don't spread easily and the batter clumps together instead, your griddle could be too hot. Turn off the heat or sprinkle some water on the surface of the griddle to cool it down and try again.