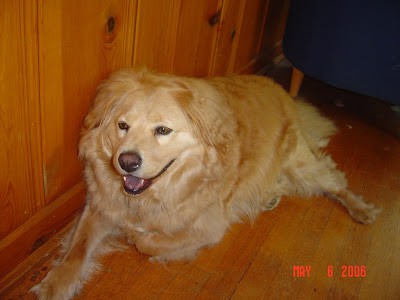 Opie is magical.
He speaks to us as effectively and easily as any human being, but with his eyes and his paws and his gorgeous, plume-like tail that wags about 90 percent of the time. When it doesn't wag, Desi and I compete to see who can make it wag again, and usually it isn't a difficult job.
Opie was born happy. He was a very happy 4-month-old when he came to our home from the Washington Humane Society, despite the fact that he had been rejected at least twice: first by those who dumped him at the shelter, then by another family that adopted him and brought him back to the shelter within a week.
I have to give Desi credit here-- we were at the shelter looking for an older dog when he fell in love with this golden furball. When we were told he already had been adopted by another family, Desi was heartbroken and we returned home empty-handed. Funnily enough, I persuaded Desi to return to the shelter the next week and there was Opie, romping around with a little German Shepherd puppy. He had been brought back by his new family that had apparently found him to be too much of a handful. This time, with Desi grinning ear to ear, we brought him home.
Make no mistake-- Opie is no picnic. He chews on everything. And I mean everything. Almost every piece of furniture and most of our shoes have been nibbled by his curious teeth. Admitted he was always upfront about it: the first time we met him at the shelter, he chewed through my dog Lucy's leash in under two minutes.
He also loves to bark at anybody and everybody that walks outside our house. Dog, cat, human, squirrel: he calls out to everyone, tail wagging furiously.
He chases our cats, Pubm and Pie, and is always trying to get into their food and kitty litter.
He sleeps on our bed, unlike our other two dogs who stick with their doggie beds. What's more, he loves to change positions a hundred times each night, which means he pretty much takes up half the bed while Desi and I squeeze into the other half.
When we walk, he sits down where he feels like it, and refuses to budge, even when it's raining or snowing or just freezing cold.
But it is perhaps that stubborn, mischievous streak that makes Opie so special. He is a dog that knows his mind, and that's about all there is to it.
Besides, no one kisses like my Opie -when Desi or I get home from work he is so excited, he hops around and elbows Lucy and Freddie, my other two dogs, out to stand up against your knees. He then pulls your face down with his paw to launch wet, sloppy kisses all over it.
But if one of us is not back, his excitement soon gives way to long-faced anticipation and he haunts the front door, waiting for the other person to get back. It is only when everyone is around - mom, dad, Lucy, Freddie, Pubm and Pie, that he is truly happy.
Those are the times that he curls on the living room couch, content to do nothing more but close his eyes and dream. For just a few minutes, before he heads back to the window to sniff for more trouble.