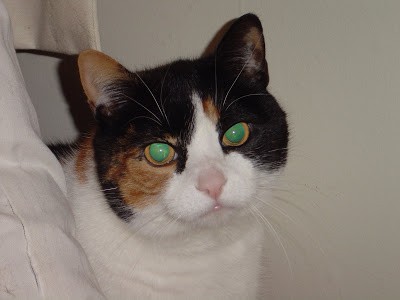 I've been meaning to blog about my beautiful calico cat, Pubm, whose picture graces the sidebar.
Pubm (her real name is Puddin') and her sister Pie came to us from the Washington Humane Society in April 2003. We had adopted two dogs from the shelter, and were back to pick up a dog we were going to foster, when Desi and I wandered into the kitty section of the shelter.
Anyone who has ever visited a shelter to pick out a dog or cat would understand just how difficult it is not to want to bring each and every one of them home. The adorable faces peer out eagerly at you across the bars of the runs, hopeful and appealing. The cats we saw were each beautiful, but the volunteer steered us toward a pair inside a crate, one black, the other orange-black-and-white.
The cats were six-year-old sisters, she said, and were dumped on a neighbor's porch by the new boyfriend of a woman who had had them since they were kittens. They had been at the shelter more than two weeks, and there was a good chance they would be put to sleep if they hadn't found a home by the weekend.
So Pubm and Pie came home with us, and promptly converted two very committed dog persons into devoted cat persons.
Pubm, initially, appeared to be the timid one, compared to Pie. She would hide under the tables or bed and refuse to emerge for hours. She did not seem to like to be held. And she appeared to panic each time the dogs were around.
But that changed slowly over the months. Naturally nosey as all cats are, Pubm, of course, couldn't bear to stay away from the "action." She learned how to integrate herself with the dogs, slowly shedding all fear of my gigantic German Shepherd Lucy and Chow mix Opie. While both dog breeds are known not to be among the friendliest to cats, and neither Lucy nor Opie was friendly initially, Pubm slowly but steadily learned how she could manipulate them so they did not bother her. A few hisses, a few bats of her little paw, and they learned she was not to be messed with.
Today, they are all a big family. Pubm seems to adore Opie, often following him around the house and into the back yard (she is an indoor cat, but we sometimes let her explore our tightly-fenced back yard). While the rest of us are in the den watching TV, Pubm and Opie will be curled up next to each other on the living-room couch, fast asleep.
She is extremely vocal as well, demanding, queen-like and in drawling tones, when she wants the doors to the basement or the backyard opened, or when she wants her food.
She delights us every day with her antics, and never tires of exploring the house and every one of its nooks and crannies. She grooms herself incessantly. And in the winter, she loves to curl up in our laps and will stay there for hours.
Pubm and Pie have been part of our family for four years now. However, there are millions of beautiful cats- even more in number than dogs- that are put to sleep in shelters each year because there are not enough people willing to give them homes. It is almost unbelievable that people still patronize pet shops and breeders (both of which should be put out of business, in my opinion) when there are so many wonderful animals in shelters across the country that would make great pets.
The situation is particularly bad for older cats because people often tend to fall in love with little kittens with their wide, soft eyes and abundant fur and want to bring them home. But older cats like Pubm and Pie adjust easily to new homes and are almost always already trained in using the kitty litter. Also, cats who are kept indoors suffer almost no major health problems, requiring just their annual shots and checkups.
Pubm and Pie were lucky to find a home before it was too late for them. But I often think we are the luckier ones for having found them.