This spicy Dry Green Peas Curry is made with sprouted dry green peas (a staple in Indian kitchens), coconut, tomatoes, and spices. There's no added oil in this recipe, and it's as delicious as it is healthy. A vegan, soy-free, nut-free, gluten-free recipe.

As the New Year rolls around, one of my hopes is to incorporate more varieties of grains and legumes in my diet.

As any Indian knows, there's way more to the mighty legume than meets the eye on the average supermarket shelf here in the United States. Being Indian-born, I was fortunate to be introduced early on to a whole host of lentils and beans that make up the average Indian diet. Most of these are easily available at Indian grocery stores here in the United States, but caught up in the rush of a busy life, I often end up using a handful of the most ubiquitous types in my day-to-day cooking, like tuvar dal, moong dal, rajma (kidney beans), and chickpeas.

But the legume world has way more to offer. For instance, the beige chickpeas we are so used to are just one type of chickpea. There are brown chickpeas and green chickpeas that you can buy in their dry forms and cook, and actually both are far more flavorful than the beige variety. There are dry green peas and dry white peas and dry black peas. There is red mung and green mung and there are little brown matki or moth beans that make the greatest little sprouts. Oh, and let's not leave out those renegade black-eyed peas.

And if a bean or lentil is not already part of Indian cuisine, it's not at all hard to mix it in. Canary beans, pink beans, pinto beans, black beans, cannellini beans, navy beans, great northern beans, lima beans, fava beans, French lentils...they can all merge into Indian cuisine effortlessly, adding their own unique deliciousness and healthfulness to traditional recipes.

One of the legumes I love but don't use often enough in my kitchen is dry green vatana or dry green peas. I tend to look at green peas -- I usually use the frozen kind -- as a wonderful garnish for my recipes rather than the main attraction. But these dry green peas, with their nutty flavor, are worthy of being the centerpiece at any meal.

To add to their healthfulness, I sprouted the green peas. They sprout quite easily, taking just a day and a half to send out tiny white shoots in my winter kitchen, with outside temperatures kissing the teens. You can read more about sprouting and its benefits in this recipe post on sprouted mung bean burgers.

This Spicy Dry Green Peas Curry needs two powdered masalas to reach its maximum potential for deliciousness: garam masala, which I assume most Indian-cuisine-loving cooks already have in their pantry, and goda masala (which translates to "sweet" masala, an oxymoron if there ever was one, but the sweetness is owed to the fact that there's coconut in the masala). I have recipes for both on my DIY Spice Mixes page, or you can buy them at the Indian grocery (be careful though because coconut sitting on a shelf can sometimes mean the masala is already rancid by the time you open the packet -- it's happened to me). If you make your own goda masala, a stalwart in Maharashtrian cooking (of which this curry is an example), you can store it for several months in an airtight container in the refrigerator. You won't be sorry.

You can, of course, forego the goda masala and just use more garam masala, but why would you be that lazy?

Here's the recipe for my Spicy Dry Green Peas Vatana Curry. Scoop it up with an Indian bread like roti or naan, or mix with some brown rice and serve with poppadum on the side. Food doesn't get any better than this. 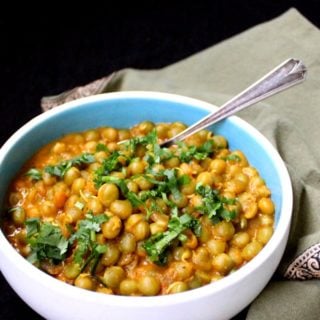