Last week, Desi and I were helping care for a neighbor's dog, Elvis, for a couple of days while his parents went to a family wedding.

Elvis is a huge yellow lab who, at two, is barely out of puppyhood. He is a terror on the leash and his idea of a walk is dragging whoever happens to be on the other end of the leash all through the neighborhood streets while he pants like a heated engine.

But he's also a huge darling. The way Elvis greets people is by hurling all 100-plus pounds of himself at you. There was this time when he threw me down on the steps, planted his front feet firmly on my lap, and began to plant drooly kisses all over my face. Try as I did I could not get up and it was only after five long minutes that he decided I had gotten the message: he was happy to see me.

Opie gets the same sort of treatment, but is a little less genial about it: when Elvis jumps at him, the smaller-- and much older-- Opie gets more than a little annoyed.

But dogs are strange, if nothing else, and despite his reluctance to meet the rambunctious Elvis on walks, Opie loves nothing more than to greet him from across the fence.

Often, when we walk, he will point us in the direction of Elvis's home, hoping he'll be out in his fenced yard. He'll run up the small hill to the fence, look for Elvis, and make little whiny sounds if he isn't there. If Elvis does happen to be outside, he will sniff at whatever part of Elvis he can reach through the fence while the other dog hurls himself with unbridled excitement at the pickets. Then, as if in quiet disdain for all this enthusiasm, Opie will plant himself on the grass and ignore Elvis completely.

Did I say dogs are strange?

Desi, who is great at making friends human and canine, has gathered a menagerie of friends for Opie. Besides Elvis, there's Tilda, an elegant golden retriever who has the most gorgeous tail and who can run like the wind. She will never stop long enough to let Opie get a good sniff, which is maddening to him.

There are Toby and Mitzi, two of the cutest bichons you ever saw. After a quick greeting, Toby and Opie immediately move on to trying to mount each other in a show of dominance. Mitzi, the dignified girl, stands apart, unwilling to become part of this display of testosterone.

And there's Otis, a sage-looking Shepherd mix who looks a lot like my Lucy. Otis and Opie have a silent understanding: they meet, they greet, and then each goes and does his own thing even as their parents catch up with each other. It's like they're saying, it's nice to see you, but I have nothing more to say. And that's okay.

I have a creamy pasta recipe for you today that's going to make you want to lick the bowl until every last trace is gone. Much like Opie when he gets his favorite dinner. My Pasta with a Roasted Cauliflower and Cashew Sauce.

I came up with this recipe trying to use up half a head of cauliflower I had in the refrigerator. I have shared another cauliflower-based pasta sauce with you on this blog before, and like I said then, I hate the boiled cauliflower smell. For that recipe, a Pasta Gratin, I baked the pasta with the sauce and it was perfect. But this time I had another idea which was even better: I roasted the cauliflower first. Then I pureed it in a blender with a paste of roasted cashews and some chipotle pepper until it was quite divine.

To cuddle with this dreamy sauce I used some whole wheat shell or conchiglie pasta.

This is a deceptively simple recipe-- it tastes and sounds like it would take a long time to make, but it really only needs minutes. And to make it even healthier, do as I did and throw in it handfuls of veggies. I used asparagus, mushrooms and edamame. Lima beans or chickpeas would also be great here.

On to the recipe. Enjoy, all! 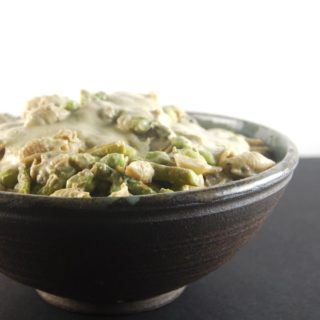