A cheesy vegan -- and gluten-free -- pasta gratin with a cauliflower-chickpea sauce. Savory, delicious, with nearly 15 grams of protein in each serving.

I think I am in love. Truly, madly, deeply in love. Or at least as much in love as one can be with a pasta.

I had been wanting to make a cauliflower sauce for my pasta -- isn't it all the rage? -- but I'll admit that as much as I love cauliflower, I am not a fan of the boiled-cauliflower smell. No matter how much everyone in the food blog world is raving about it, and no matter how much healthier it is than other vegan cheese-sauce substitutes like cashew, I couldn't stomach the idea of a sauce that reeked from here to cruciferous eternity.

Then I had a brilliant idea: I would bake the sauce in a gratin and the baking would pretty much take care of the smell. I was on a roll. I needed some protein in my recipe, so I would throw some chickpeas into the mix. And some chewy, earthy, meaty cremini mushrooms to complement the silky-smooth sauce.

In went a bunch of ingredients to make the sauce as cheesy as possible without actually using cheese or any cheese substitute, and trust me, this is a cheesy vegan sauce if you ever had one. And the gratin is creamy inside and crunchy on top and rich without being heavy or fatty, and full of flavor. You might catch yourself daydreaming about it. I did.

I used a wonderful, gluten-free brown rice pasta for this gratin, but use regular vegan pasta if you'd rather-- it won't make any difference. This recipe makes a ton of food-- enough to serve a crowd-- so you will need a big baking dish for it, or do as I did and throw it into a large cast-iron skillet. It makes for very pretty presentation too. 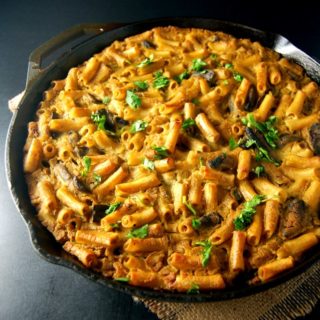