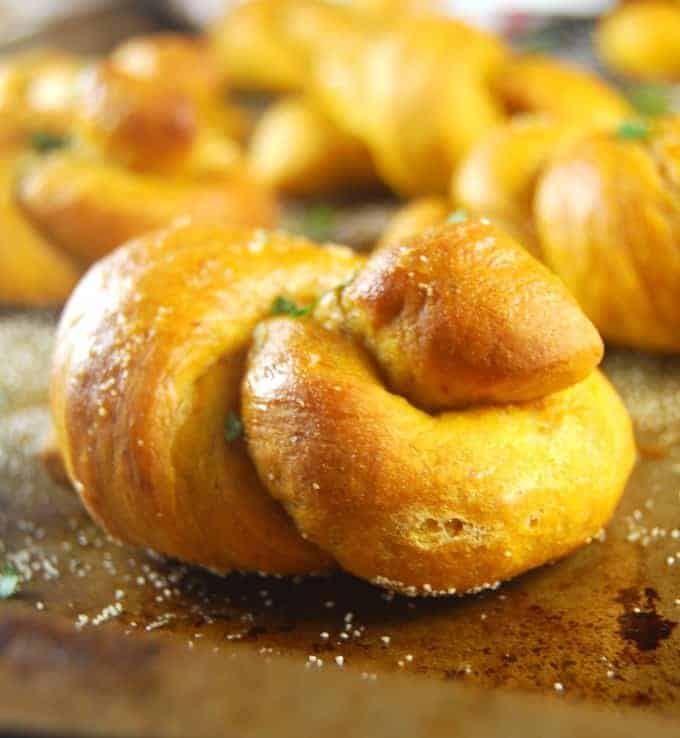 The season demands orange. There are pumpkins sitting on our front porch right now, and the maple outside has turned many shades of orange. At the end of the street, a neighbor who’s a Syracuse alum has put up a flag that opportunely matches the jack-o-lantern at his doorstep.

In my kitchen too, orange has been putting in an appearance, with all of the squashes now on the market, and my new resolve to eat more sweet potatoes and carrots.

I was reading an article by a chef the other day who described her mom as someone who always made it a point to make her family eat only healthy foods even as she sat at the table smoking a cigarette and snacking on potato chips herself. I laughed out loud, because it reminded me of someone I know– myself. 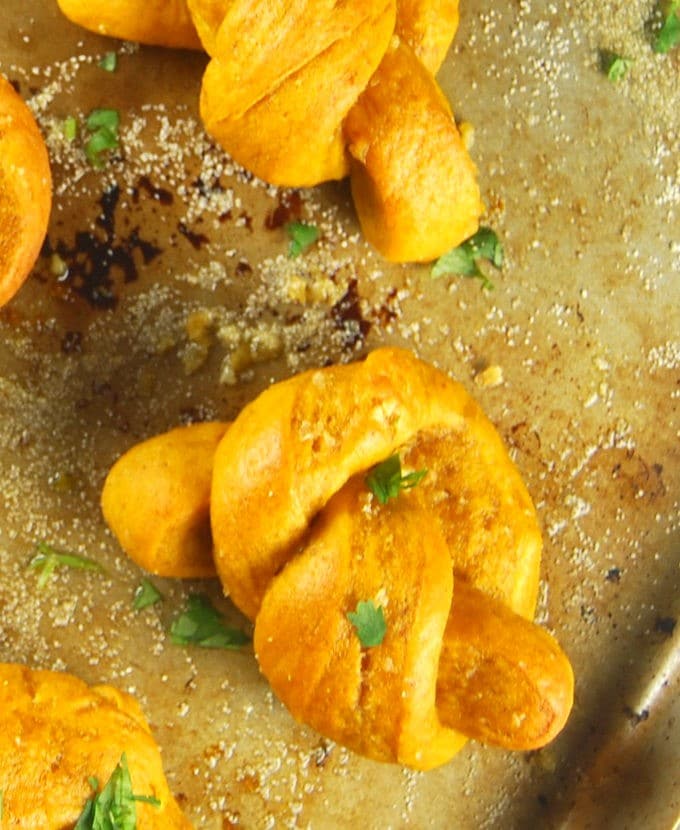 I don’t smoke but I am guilty of trying to make everyone else eat healthy (Jay, Opie, Desi and you included) while ignoring the rules myself. I try to get around snacking on salty, crispy foods, my greatest undoing, by just not keeping them around, but when a bag of chips or pretzels happens to sneak in the door, there is pretty much no doubt where it will end up.

I dream of all those healthy, salty, crispy snacks I would make, if only I had the time. They’d be wholegrain, and low-fat, and Jay and I would gorge on them until we could eat no more, and when I weighed myself the next morning I’d be down two pounds.

In the real world, though, I know that I need to push up my intake of fruits and veggies. Therefore the resolve to eat more carrots and sweet potatoes and all kinds of veggies. And squash, because there isn’t a better time in the world to eat it than right now, when fall’s here and winter’s knocking. 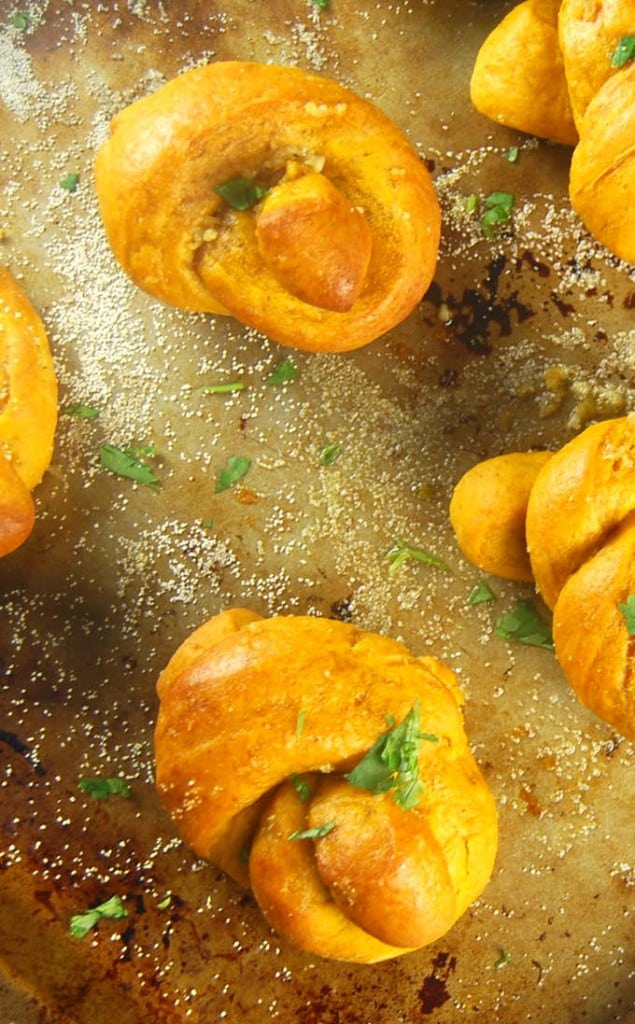 In these Whole Wheat Pumpkin Garlic Knots I have for you today, I have tried to marry my delicious dream of a healthy, salty snack with the reality of eating more healthfully. I am not claiming these will melt the pounds off your waistline, but after eating one you won’t be left feeling like you shouldn’t have.

I had some pumpkin left over from making this vegan pumpkin pie, and I don’t need an excuse to chop up lots of garlic and heat it up with olive oil into an unctuous, fragrant sauce that I can slather all over my soft, pillowy pizza knots and their chewy crusts. These are also rather pretty, with a soft, seasonal color.

As I tore my third one apart, I was floating in heaven surrounded by puffy, orange clouds of dough that smelled of garlic and olive oil. They were dreamy and delicious and quite perfect. 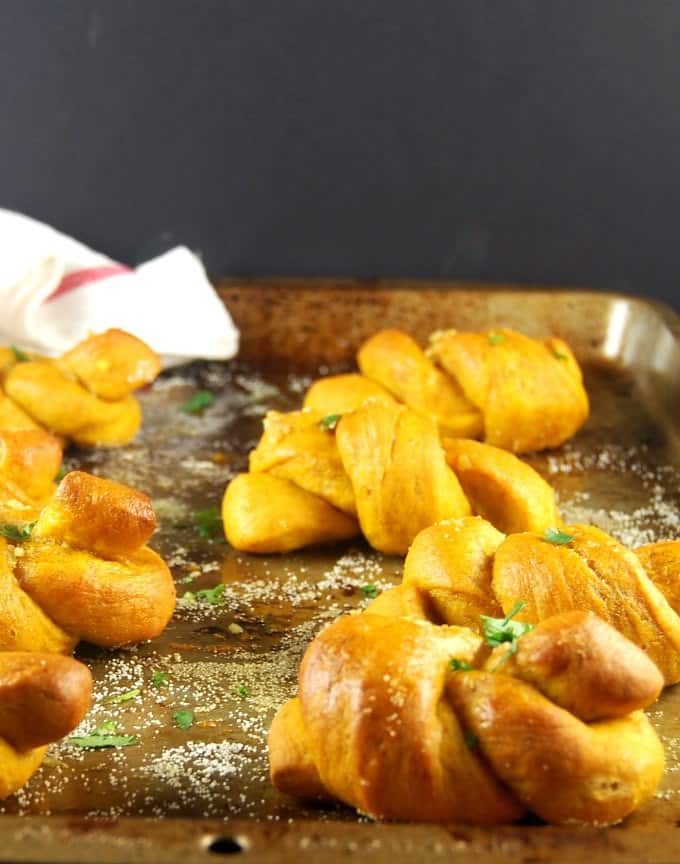 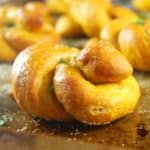 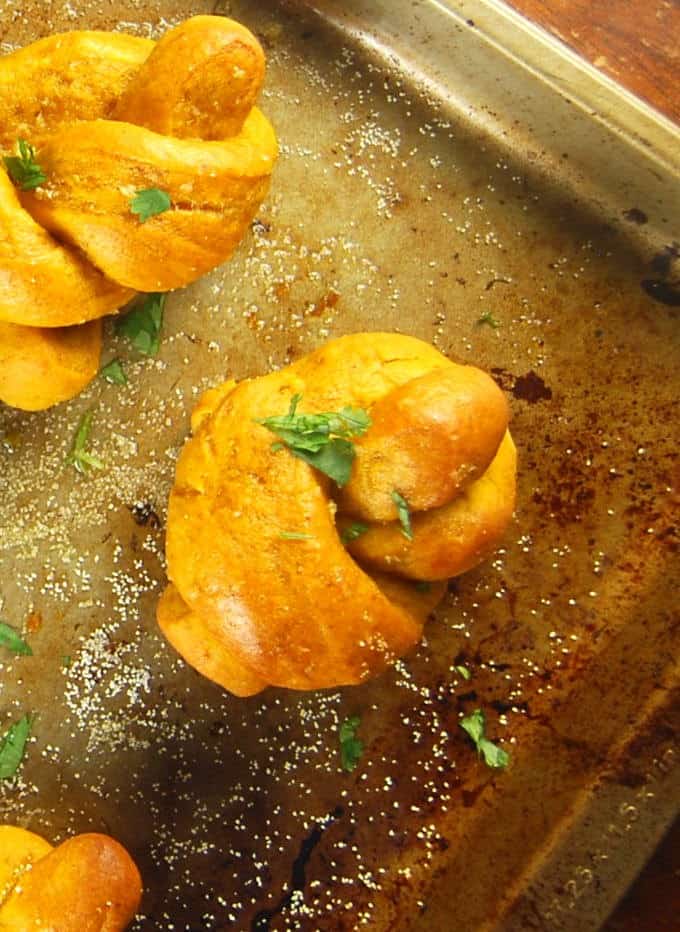