Savory, with a crispy crust and a fluffy crumb, these onion poppy seed rolls stuffed with golden, caramelized onions and poppy seeds will be the stars at your dinner table. Vegan, soy-free and nut-free recipe.

I am in love. With this onion poppy seed roll.

So yes, it’s a bread roll, and it’s really just a thing, and that too a thing I will demolish in a few bites, but so what? This is true love.

Why else did I bake up so many versions of this roll in the past week and still stay enamored? And I don’t really have words to describe how amazing they are, these rolls. They are savory with the caramelized onions, slightly crunchy with the poppy seeds, beautifully golden and crispy on the outside, and soft and cloudy and fluffy as can be on the inside.

Onion Poppy Seed Rolls are usually made with a challah dough, and with raw onions, and I love the raw onion version too (which has a different, equally delish flavor). But the caramelized onions add a touch of class and richness. They do add an extra step — you have to caramelize them — but it’s totally worth it.

You also have some choice in how you shape and bake these, and it will make all the difference to your rolls. If you want more of the crispy crust, bake them in a muffin tin. They’ll come out beautifully golden, and divine.

If you want a nice presentation, make them pull-apart style, in the large pan, like the photographs. They bake up all snuggled together, like cinnamon buns, and they have less of a crust but a lot of fluffy crumb to slather vegan butter on.

How to bake the most perfect onion poppy seed rolls:

So go ahead, make some Onion Poppy Seed Rolls for yourself, and enjoy them! And when you do, come back and tell me about it. 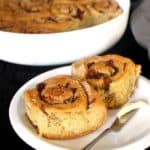 Savory, with a crispy crust and a fluffy crumb, these onion poppy seed rolls stuffed with golden, caramelized onions and poppy seeds will be the stars at your dinner table. Vegan, soy-free and nut-free recipe.