A bubbling, golden and vegan Guinness Pie made with blonde Guinness, veggies like carrots, potatoes, celery and tomatoes, and chunky bits of vegan chick'n. Perfect for cozy dinners or for the holiday table. The recipe is nut-free and can be gluten-free.

After falling in love with everything Irish since my trip to that gorgeous country, I'd been dying to make a vegan Guinness Pie and devour it. So I did, and now I have one more favorite family dinner that I know I'll be making again and again.

Savory pies are the ultimate comfort food, and I love baking up pies like these reader favorites vegan pot pie and vegan mushroom pot pie all year round.

The recipe for this Guinness pie is my own, but I drew on ingredients and flavors that would go into an Irish chicken stew. And I used Guinness as part of the flavor base -- although the Guinness I used was not the traditional stout used in pot pies like these but rather the lighter, citrusy, blonde Guinness which, I think, works better with a recipe that doesn't actually have red meat in it.

On top of all that stew-y goodness I layered on strips of puff pastry that baked into golden, delicious crispy-ness. It was heaven on a plate, and I couldn't stop eating.

This is a rather easy recipe, and you can put it together rather quickly with storebought puff pastry (you can also use this healthier homemade whole wheat vegan puff pastry). For the rest, all you need to do is chop the veggies, and you're pretty much done with prep.

One word about the vegan chick'n stew that goes into this dish. This is an incredibly flavorful stew and you can totally serve it by itself, with rice or a crusty bread. If you do, you might want to thin it out a little more with vegetable stock.

What is a Guinness Pie?

The New York Times' Sam Sifton describes a Guinness Pie as "beef in dark, silky gravy composed of fat and reduced stout, flecked with tender vegetables, covered in pastry... Eating it — salty and rich, buttoned with sweetness — will occasion thoughts of a coming walk or a nap on the couch with the dog." All true, except, happily, there's no beef around here, so I riffed off with a traditionally flavored and very vegan "chicken" stew, and it's just as delicious. You can definitely use a beef-like stew as a filling -- my vegan Irish Stew recipe would be perfect if you want a more traditional but vegan Guinness Pie.

Do I have to use Guinness or will another beer do?

I used Guinness because although I was veering away from the more popular stout here, I still wanted those unique flavors in there, only lighter. You can certainly use another beer, something with a floral, citrusy bouquet.

What do I serve with this vegan Guinness Pie?

You don't need much, really. I'd pair it with a glass of wine and a salad, at most.

I don't want to use chick'n. Can I use something else?

Yes, absolutely. You can try this with either tofu (super firm or extra firm with water drained), tempeh, white beans, or any other kind of vegan meat substitute. Add these at the same stage you'd add the chick'n.

Can I make this ahead?

You can make the stew ahead and refrigerate it for up to 3 days or freeze for longer. Before serving, thaw, cover with puff pastry, and bake.

Do I have to make a lattice top with the pastry?

No. But let me preface that by saying that a lattice top is not difficult to make at all and the minimal effort gives a spectacular result. I don't really have the patience (or skill) to make a great lattice top that's perfectly woven, so I usually just lay the strips on and bake. But it still looks pretty darn good, doesn't it? If you absolutely don't want to, just layer on the sheet of puff pastry and cut a few slits in the middle in a star pattern. Your pie will be just as delicious. 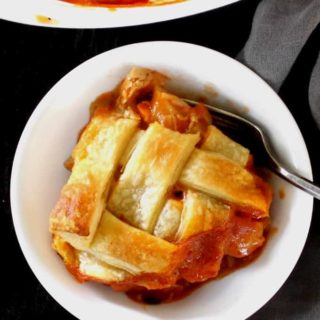