Jump to Recipe Pin Recipe
Delicious vegan Irish Hand Pies made with a stuffing of cabbage, potatoes and smoky tempeh instead of the traditional meat, All the healthy goodness is encased in a coconut oil whole wheat crust.

What's not to love about hand pies? Especially when they are stuffed with a delicious filling of cabbage and potato and smoky tempeh. And encased in a crispy, flaky, whole wheat crust?

I love hand pies, as you may have noticed from the number I've posted on this blog -- from savory baked samosas with chickpea filling to chickpea mushroom turnovers to my naan-calzones and pita packets. Part of the reason hand pies are so popular around here is because I have fast discovered that it's easy to feed a kid something -- almost anything -- when you encase it in an attractive cover, or in this case, a crust.

Not that Jay doesn't like cabbage or potatoes-- he loves both. And the crust is so flaky and tender that he doesn't mind-- doesn't care-- that all of it is actually good for him.

I usually share a vegan Irish recipe or two for St. Patrick's Day, and these Irish Hand Pies just screamed out "make me, I'm special!" So I did. Hope you do the same! 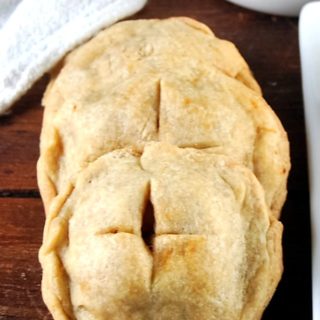 For the hand pie wrapper