So these last few weeks of cooking for a fussy six-year-old have turned me into a bit of a Machiavelli, cooking up schemes to stay ahead of the game. And for some crazy reason, I thought you would want to read my scary little tale.

Before I became a mom in the real world, I liked to dream of a fantasy one where my child would love vegetables, adore whole grains, and wouldn't get enough of beans and lentils (c'mon, I'm not naive-- I did say it was a fantasy world). Of course there would be ice cream and cookies and chips and donuts, but they would be occasional treats. And wholegrain, when I could help it.

Meeting Jay was not an unexpected but still challenging introduction to what a child's fantasy world looks like. For the first few days after we had picked him up, we waited at a hotel in Delhi for his immigration-related paperwork to come through. We had the luxury of hotel breakfast buffets and dining out and Jay, I soon found out, had a tendency to rush for the fried and the crispy and the intensely sugary. Even muffins-- decidedly less sweeter than cupcakes-- did not meet his bar.

After two days of watching him make the worst possible choices, I decided to take matters in hand. At breakfast, he would eat a healthy food like cereal or idli or dosa, followed by fruit, and after that, if he was still hungry, he could have anything he wanted.

Easier said than done. Every day he ate that healthy breakfast, Jay would want to throw up right after. In fact, throwing up, we discovered, was his response to anything he really didn't want to do. While sometimes he actually did manage to summon up some icky stuff, at others it was clear he was pretending because he'd retch and retch and nothing would come out. So Desi and I did what we thought was the only reasonable thing to do. We treated all of those throwing-up fits as though they were no big deal. When it happened, Desi would quietly leave the table to take him to the bathroom, and after it started to happen in the car-- whenever we were out and he didn't get a toy or something else that he had just seen in a store -- we started giving him a paper bag to throw up in. We were mindful to keep an eye on him in case it was something more serious, but we didn't make a big fuss when he threw up, nor did we give in to his demands.

A week or two later, realizing he was getting nowhere, the throwing up subsided, although it's not yet completely out because, let's face it, kids will throw up sometimes and it's okay when it's not part of a tantrum.

There's more. I have been trying to ease Jay's transition by making familiar foods for him, like dal and rotis and rice and sabzi-- all foods he routinely ate at the orphanage and liked and are quite healthy. But every time I'd introduce a new meal like spaghetti or a sandwich-- even one touted as "kid-friendly" by every food website in the world -- he would turn up his nose.

I am a bit of a food Nazi (thanks to my mom whom I am increasingly channeling these days) which means Jay isn't just allowed to refuse what he thinks he doesn't want to eat, nor do I rush at dinnertime to cook something else for him just because he isn't too keen on the food I just served (I've seen enough friends with kids have their lives reduced to misery with that attitude and even if I didn't work full-time there's no way I'd cook two separate meals). So I've set a simple rule: he gets to choose how much he eats, so if it's an unfamiliar food and he wants to eat just a little first, that's what he does. There are meals when he isn't too sure about a new food and will pick at it, but there are others when he will stuff himself silly on seconds and thirds. In balance, I think he is doing just fine. Increasingly he is opening up to new foods although we still have a long way to go, and yes, he does clean his plate at every meal, like mommy and daddy do.

But here's what's been the most challenging part:

In the first week of bringing Jay home, Desi and I found ourselves sitting at the table for more than 90 minutes for each meal while Jay slowly chewed his food, got distracted by every single thing around him, picked imaginary hair out of his plate, and hid food in the sides of his mouth -- we later found that he just spat it out when he went to the sink to rinse his mouth.

Since we simply don't have 90 minutes to devote to each meal-- who does? -- I came up with a trick. I started to time his meals.

So he gets half an hour for each meal and if he goes over that, he gets a cross. Five crosses mean that the next day, he doesn't get the half-hour of TV he is allowed each day. Five stars -- one star for each meal completed on time-- means he gets a food treat he loves. Jay doesn't like getting those crosses and he does enjoy looking at the timer and shrieking in mock terror as the minutes count down. He has actually finished at least three meals within the half-hour limit in the last week, and we got very close on many others. Yes, there are still days when he will sit at the table for an hour or more and look dolefully at the food as though it's going to kill him, but I am feeling more confident now that in time my scary tale is headed for a happier ending.

These Mushroom and Chickpea Turnovers are food in his new world that Jay actually likes, perhaps because they are crispy and savory. And even if you don't have a fussy child to deal with at mealtimes (lucky you!), you will love them. They make a great snack or a lunchbox/brown bag and they are utterly delicious. Even better, they're healthier than your average puff-pastry-turnover recipes because I used part-whole-wheat pastry to make these.

I had the pastry sheet left over from my Thanksgiving dinner, where one of the dishes I made was a Potato-Olive-Onion tart. It was delicious and because this was a rather special Thanskgiving for our new, bigger family, I didn't really have the time or opportunity to take photos. But I promise to make it again and share it someday. I won't repeat the puff pastry recipe because I've already posted it before with these vegetable puffs-- all you need to do for a whole-wheat version is substitute half the flour with whole wheat. You can also just buy it from the store-- popular brands are typically vegan.

One of the best things about this recipe-- one I know all moms will like to hear -- is that it comes together in minutes. The puff pastry is something you hopefully already have on hand when you make these, and most ingredients come out of jars or cans. The only thing you need to chop is the mushrooms and onions and coriander leaves.

Now for the recipe. Enjoy, all! And for more inspiration if you're planning to cook vegan meals for your kids, check out my compilation of 66 Kid Friendly Vegan Recipes. 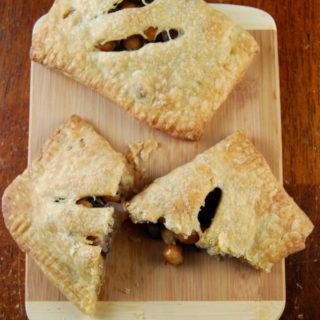