A spicy, delicious Soya Pulao is an Indian weeknight dinner table favorite, and it comes together quickly with pantry ingredients. Kids love it too! Gluten-free and nut-free recipe.

Long before soy products like tofu and soy milk made an appearance in India, there were soya nuggets or soya chunks.

I remember they were marketed as a meat alternative for vegetarians and they were quite popular, despite the fact that soy, until then, had been alien to the Indian diet, not even featuring in Indo-Chinese cuisine.

The reason for their popularity was partly the unfounded insecurity Indian vegetarians have always felt about the amount of protein in their diet (despite a cuisine rich in legumes and grains that contribute more than enough--and heart-healthy--protein). Misconceptions and politically incorrect jokes about vegetarian Indians (usually south Indians) being physically weaker than Indians who ate meat were common, and the sellers must've been only too thrilled to find a vast population eager to lap up their product.

But it wasn't just vegetarians who took to it. Most omnivore Indians, at least in those days, ate meat only occasionally, and the soy nuggets offered a frugal alternative.

I remember cooking with them once or twice in those days, mostly using them in spicy curries. After moving here to the United States, I occasionally used soy chunks or TVP chunks in dishes like stews but not so much in my Indian recipes.

That changed when Jay, my son, came home to us five years ago.

Certain foods would trigger memories for him and he'd tell me about this favorite dish or that so I could recreate them for him, usually by describing it because--understandably for a kid--he had no idea what these dishes were called nor what any of the specific ingredients were.

On a trip to an Indian store, he grabbed a packet of soya chunks and began telling me about this rice dish studded with them that he had eaten occasionally at the government-run school he'd attended in Bombay. And while he remembered the school version as being bland, he was rather fond of it because, he said, he had loved sucking on the nuggets to draw out the "salty" juices inside.

Realizing that what he was describing was a soy pilaf, or a soya pulao as it would be known in India, I came up with my own version of this rice dish for him.

I did make one big change: my soya pulao is anything but bland. It is bright with spices and layers of flavors from onions, tomatoes and green peppers. And the soy nuggets add texture and protein, making this both a healthy and delicious dish.

This dish always gets a thumbs-up from Jay, so if you have little ones of your own, you might want to try it on them. It's easy to make and it's nutritious (unless you absolutely won't consume soy, in which case you can look for alternatives in the section below).

How to make the best soya pulao:

What to serve with the soya pulao:

A raita like my cucumber raita goes best with this pulao. Serve with poppadum on the side for a delightful meal. 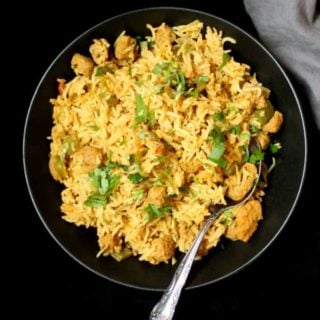