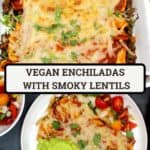 These delicious vegan enchiladas are fun but healthy, with a stuffing of smoky lentils and veggies. They are doused in a flavorful, easy, 10-minute enchilada sauce, smothered in vegan cheese and baked until the edges are crispy.

If a tasty, easy--but fun--recipe for Cinco de Mayo is what you're looking for, you can't go wrong with these Vegan Enchiladas with Smoky Lentils.

Food doesn't get any better than this: soft corn tortillas are dunked in a bright red, flavorful enchilada sauce, stuffed with a smoky mix of lentils, carrots, leeks and celery, smothered in vegan cheese and baked until the edges are crispy and the cheese is melting and golden-brown.

Serve with toppings like salsa and guacamole and you have a winning recipe that'll have everyone begging for more.

I took inspiration for my vegan lentil stuffing from these creamy vegan lentils with ancho that I shared with you in the past. But I did tweak it to make it simpler as I was making these on a weeknight and speed was important. Instead of the ancho paste, I used chipotle chili peppers in adobo sauce which also add smokiness and heat.

There's more smokiness in the enchilada sauce with smoked paprika and oregano. I smothered it all in vegan cheese shreds because I cook in the real world for a real preteen and sometimes I need to give a little to get him to eat and lick his plate clean.

Try it, and let me know if you do. I know this is going on my regular rotation for easy meals that everyone loves.

What you'll love about this recipe

Ingredients you will need

How to make the best vegan enchiladas 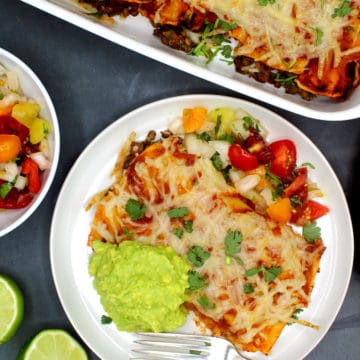 For the lentil stuffing

For the enchilada sauce