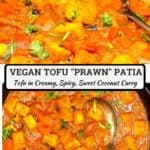 Prawn Patia is a classic dish made with shellfish and it comes from India's small but prominent Parsi community. Its incredible mix of flavors--sweet, spicy, salty, tangy and savory--works just as well with tofu in this vegan version.

In my memory, a Prawn Patia will forever be the dish that made me sick as a dog the first time I ate it, yet it was so good I fell in love with it.

The sickness I chalked down to the prawns, a shellfish very similar in appearance to shrimp, and the possibility that hygiene at the hole-in-the-wall restaurant in Bombay we had eaten at, known for its Patia, may have been short of stellar.

And the love? Well, it was impossible not to adore a coconut curry that's a tango of salty, sweet, tangy and spicy.

I learned how to make a prawn patia just as delicious, and after becoming vegan, I morphed it, effortlessly I think, into a Tofu Patia, where chewy chunks of tofu stand in for the shrimp.

My Tofu Patia recipe has lived on this blog for 12 years now, and so many of you have made it and loved it, so I wanted to bring it back to the top for anyone who's new to the blog, with new photos.

The Parsis-- who migrated to India from Persia more than a thousand years ago because of religious persecution-- are also some of its most interesting and, to some extent, inscrutable residents. The story goes that when they landed in Gujarat, a state in western India, the king there accepted them on the condition that they would not seek converts. They assured the king that they would assimilate into the local culture as a spoonful of sugar in a glass of milk--a promise they lived up to.

Parsis are often described in cliches like tight-knit, wealthy, insular and eccentric, and there's some truth in all of that. But to my mind no one describes the community better than my friend Lyla, a willowy, green-eyed woman with a quick wit and a ready laugh.

At the Bombay newspaper where we worked, Lyla would often regale us with stories of her adventures about the city which, one time, included taking her aging mom and aunt to a strip joint in South Bombay because, she said, she had never been in one but didn't dare to go alone. The next day she related, deadpan, a colorful account of the goings-on, including what the dancers did and her mom's and aunt's reactions.

Parsi cuisine is just as delightful. The settlers borrowed from the flavors of western India, where they settled in, as well as from the flavors of their native Iranian cuisine to come up with unique dishes like koimino patio (prawn patia), dhansaak, a combination of mutton and dal, and akoori, a spicy, scrambled egg preparation.

Prawn Patia sparkles with vibrant flavors. Instead of the prawns I used tofu air-fried with turmeric, cayenne and a touch of Old Bay seasoning for the seafood flavor.

What you'll love about this vegan Tofu Prawn Patia

What to serve with the tofu patia

Jeera Rice or Cumin Rice is really nice with this patia. But plain boiled white or brown rice will do too.

Serve with a fresh salad or a Cucumber Raita on the side.