Some tastes are impossible to erase from memory, and one such flavor for me is that of a Mawa Cake, a milk-based, cardamom-scented delicacy I ate growing up in Bombay's delicious Irani restaurants. My vegan version is eggless and dairy-free, of course, but it's so close to the real thing, you'd never know.

I have for you today a cake that's incredibly close to my heart--and perhaps loved by anyone who ever stepped into one of Bombay's quaint but disappearing Irani restaurants. A vegan Mawa Cake.

A Mawa Cake is a soft, tender and delicious cardamom-scented cake with a texture not unlike that of a pound cake, except perhaps a little denser. That texture, as important to the uniqueness of this cake as its unforgettable flavor and richness, comes from the use of mawa, a reduction of milk.

Mawa is used in lots of Indian sweets, which tend to be milky and very sweet and cardamom-scented, and the story goes that the Mawa Cake was created in the kitchens of Merwan's, one of the city's most legendary Irani cafes, using ingredients you'd find in most Indian sweets.

Before McDonald's and Pizza Hut and dozens more global chains descended on India, Irani restaurants like Merwan's were where you went for a quick bite of something delicious that arrived quickly, didn't taste like typical Indian food, and yet was immensely appealing to most Indian tastebuds.

At one time there were more than 400 Irani restaurants dotting Bombay, usually outside railway stations or near movie theaters. They were familiar yet exotic, like the food they offered that became entrenched in the city's diverse and rich food landscape.

Irani restaurants, as the name might suggest, were opened by immigrants who arrived in India from Iran (then Persia) in the 19th century. Although often confused with Parsis, who migrated to India centuries before the Irani community, the Iranis, albeit Zoroastrians like the Parsis, spoke a different language and had their own strong cultural identity and cuisine which set them apart.

In Andheri, a suburb of Bombay where I grew up, there were two Irani restaurants outside the railway station. When we were children, my father would treat my brother and I to a quick snack of warm-from-the-oven bun-muska (a sweet bun slathered with Amul butter) after we'd taken the train back from visiting relatives or friends.

Many of the city's better-known Irani restaurants were in South Bombay: Kyani's, Bastani's, Britannia, Yazdani's, Sassanian's... You could almost describe them as the city's first fast-food joints but that wouldn't do them justice because although the food arrived fast, the atmosphere was anything but rushed.

In fact, time seemed to slow down inside an Irani restaurant. They were usually located at the corners of old, British-era buildings, and were spacious and airy with at least two wide doorways-- said to be designed to keep up a smooth flow of people exiting and entering the restaurant. The floors were marble, the tables were round and marble-topped with a wooden base, and the wooden chairs were straightbacked and fragile-looking. Rumor had it that the chairs were deliberately designed to be uncomfortable to keep diners from sitting too long.

Inside, tacked on to one of the many mirrors on the walls, would be a longish list on Irani restaurant etiquette and it usually went something like this: No combing hair, no spitting, no sitting long, no politics, no discussing gambling, no leg on chair, no beef, no credit, no fighting....and so on. Sometimes, also tacked to the mirrors, would be pictures of Zoroastrian gods.

Despite the chairs, people tended to linger. The food was invariably cheap and no, nobody really cared if you did talk politics. In fact, a popular pastime for older residents would be to go to the local Irani restaurant first thing in the morning, order a cup of tea, and discuss the morning newspaper to every last detail, often with the restaurant owner who'd sit at the cashier's counter.

Your order was always taken by one of the matter-of-fact waiters (always male) with a pencil tucked behind his ear and an elephant's memory for everything you ordered. The special sweet, thick, milky tea could be had paani kam (with less water) so it would be sweeter and thicker and milkier. Or you could order Market, an unusual mix of tea and coffee. Or a plate of salty, layered, crispy khari biscuits or sweet, buttery, melt-in-the-mouth Shrewsberry biscuits. Vegetable puffs. Akuri, spicy scrambled eggs. Mutton patties and chicken patties. Slim sandwiches of white buttered bread with pieces of boiled meat inside. Or the ultimate decadence-- a dish of pastries filled with all kinds of cupcakes and cakes. You could take what you liked, and the bill would be written up only for the pastries you ate.

When you were ready to go, you always paid the cashier, never the waiter. At the cashier's counter, you could order fresh-baked breads to take home. The warm rolls would be wrapped in a newspaper before being handed to you. Desi, who lived in Dhobi Talao for a few years, remembers buying brun paav each morning from Kyani's and dunking a roll into hot tea for a delicious breakfast.

Behind the cashier would be rows of large glass jars filled with all sorts of baked biscuits (cookies) and other goodies that you could order by weight. Desi and I never failed to pick up a few mawa cakes shaped like mini loaves or little ovals depending on which Irani restaurant you were in, and always fresh baked.

Unfortunately, like a lot of good things, these family-run joints have been priced out by global fast food chains. Bastani's, an institution for many Bombayites, closed its doors several years ago. Merwan's, the creator of the Mawa Cake, closed in 2014. And the last time I was in Andheri many years ago, a McDonald's had replaced the Irani restaurant I remembered going to so many times as a child.

For me, the flavors of an Irani restaurant were concentrated in the Mawa Cake. And it was the food I missed and craved most of all after moving here to the United States, especially after I became a vegan. Making a vegan mawa cake became an obsession and I came up with a very tasty version that used vegan cream cheese in lieu of the mawa. I shared that version with you many years ago.

As good as it was, though, it wasn't exactly what I wanted. Besides, vegan cream cheese is highly processed, and I wanted to try out a version that would use ingredients most people would have around the house.

This Vegan Mawa Cake I have for you today is a labor of love, and it will hit the spot for anyone who loves the mawa cake, or has never had one but wants to. I hope you will try it, and if you do, imagine yourself, for a moment, in one of those cute corner eateries where one could never spend enough time with friends, where the food was always delicious and the prices always low.

Here's to all those amazing Irani restaurants-- and here's hoping they survive.

Like I said above, the most important substitution in this cake is for the mawa, a thick, pudding-like reduction of milk that gives the mava cake its dense yet tender and moist texture. And while the mawa itself doesn't have a strong flavor it adds a lot of richness to the cake. So to make up for that texture and flavor, I used two things: cashew cream and almond flour.

Be sure to make a really smooth cashew cream with no bits of cashews in it. Soak the cashews first for at least 30 minutes if you don't have a very high-powered blender and drain them before using. You will blend the cashews themselves with almond milk for the perfect, creamy texture and flavor.

Use superfine almond flour. You want the cake's texture to be really smooth, not grainy.

Soften the butter before using.

Mawa Cake also uses eggs, although some Irani restaurants now offer versions for Indian lacto-vegetarians that are eggless. There are no eggs in this vegan recipe, but a dash of lemon, cornstarch and the cashew cream help the cake bind.

I used a tablespoon of cornstarch for a tender cake. It sliced nicely but the corners crumbled a bit. I really love this texture, and my family did too, but for a firmer cake add an additional tablespoon.

Cardamom is king in this recipe, and I like using two teaspoons of it which, I think, gives the perfect flavor. It may seem a lot, but it really isn't. But if you're wary, you can halve the amount.

There's a cup of sugar in this recipe, and I tried a version with less sugar--¾ths cup. It was delicious, but it wasn't as sweet as I remembered a mawa cake to be. You can go with the smaller amount for sure if you want to. If you use less sugar, keep in mind the top of your cake won't brown as much, so it won't quite have that authentic, mawa cake look.

You need a bit of vegan yogurt in this recipe, and it also helps build up a richer flavor and color. I use my homemade vegan cashew yogurt.

Keep in mind that you'll need to change the baking time for different sized pans. Bake the cupcakes for 28 minutes, mini loaves for 33 minutes and if you make it in a regular-sized loaf pan or cake tin, bake for 35 minutes and then test with a toothpick. If it comes out with batter on it, bake a few minutes more until the toothpick comes out dry.

Always cool your cake thoroughly before unmolding or slicing it. Cool it on a rack. 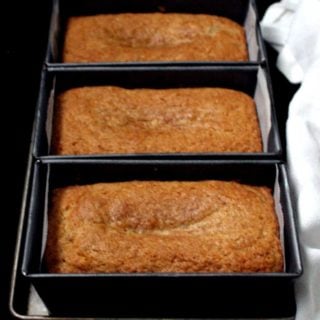