Nothing says summer like this sunny and bright vegan Lemon Pasta with the sweetness of basil woven through. The no-cook sauce is super easy and comes together in five minutes. Serve it with a salad for a delicious meal on the run. A soy-free recipe, can be gluten-free and nut-free.

I love the sparkling joie de vivre of lemon in any pasta, especially so when it's boldness is mellowed--but not stifled--with olive oil and combined with the sweetness of basil in this Vegan Lemon Pasta with Basil.

This is the kind of food I can eat any day for any meal. It's rich but not heavy, and it has all the warmth and brilliance you'd expect of the season.

This is a lemony pasta, and by that I mean it's super lemony. There is half a cup of lemon juice here, and shards of lemon zest from two large lemons, coating a pound of spaghetti. The basil adds a nice break with its licorice-like sweetness.

The sauce itself couldn't be easier to make. It comes together in a bowl and requires no cooking, just five ingredients (and a sixth, optional one) and a whisk. All you need to cook is the pasta.

You can make this recipe gluten-free by using gluten-free pasta, or entirely no-cook by using zucchini noodles, if you have a mind to. I hope you'll try it. This pasta makes me happy every time I eat it, and I hope it will make you feel the same way!

How to make the vegan lemon pasta sauce:

You will need two to three large lemons to make half a cup of lemon juice. Try and use organic lemons so you can also zest them. The zest adds more complex flavor to this dish, and you don't want to miss out on it.

The rest of the sauce is made with extra virgin olive oil, vegan cashew parm, salt, pepper, and an optional ingredient--vegan mayo. I like using the mayo because it makes the lemon sauce creamy and mellows the lemon flavor down just a little without taking away from its richness. You can leave it out altogether.

I used both parsley and basil this time in the pasta because I had a little bit of both. You can go with either, but I really love the sweetness of basil in this dish.

Once you have all your ingredients, just place them in a bowl and whisk, then stir in the pasta. Don't forget to reserve some pasta water to add to the sauce.

Ingredients you will need for this recipe:

-Lemons
-Pasta (spaghetti is great, but another long pasta shape, like fettuccine, works as well)
-Extra virgin olive oil (use a good variety since this is one of the main flavor components)
-Vegan Cashew Parmesan (use my easy recipe or a storebought version)
-Salt
-Ground black pepper
-Vegan mayo (optional, but nice) 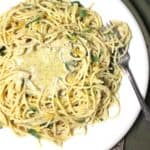 Nothing says summer like this sunny and bright vegan Lemon Pasta with the sweetness of basil woven through. The sauce is super easy and comes together in five minutes with no cooking needed. A soy-free recipe, can be gluten-free and nut-free.
Course Main Course/Pasta
Cuisine Can be Gluten-Free, Can be nut-free, Italian vegan, Soy-free, Vegan
Keyword vegan lemon pasta
Prep Time 10 minutes
Cook Time 10 minutes
Servings 8 servings
Calories 424kcal
Author Vaishali · Holy Cow! Vegan Recipes