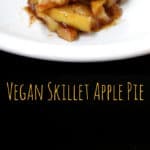 This traditional vegan Skillet Apple Pie is golden and delicious and it makes enough pie to feed a crowd. The vegan pie crust is  flaky and tender, and the perfectly sweet and silky filling of velvety apples spiced with cinnamon and ginger will have your guests begging for more. Soy-free and nut-free recipe.

This vegan skillet apple pie is going right up there with those favorites.

I used my favorite 9-inch cast iron skillet for this pie -- you can read here how I got it. I give thanks for it each time I use it. Just like I give thanks for all the little and big joys in my life, from my family of humans and animals to my friends to this blog and you, my readers, who I love and will never take for granted.

This pie is as traditional as it gets -- without the butter, of course, and the egg wash. Instead, I use vegan butter sticks which do a fine job of making the crust flaky and tender with no animals harmed. If you don't mind using shortening, which is usually vegan (and be sure to use the one that free of trans fats), you could substitute half the vegan butter with shortening and you'll have an even flakier crust.

We really loved this apple pie. The crust is always the favorite part in our home, and it was, true to the promise, crisp and delicious, top and bottom. As much as we love pies around here, something tells me this vegan Skillet Apple Pie is going to get baked in this kitchen again and again. 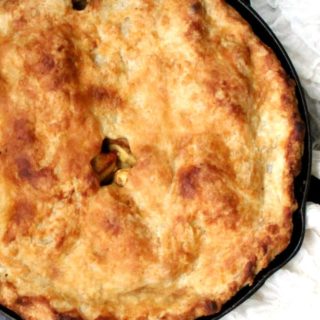 Assemble and bake the pie: