My vegan Creamy Chipotle Green Beans come together in under 15 minutes and need just five ingredients. But they are so delicious, you'll be licking the bowl. Soy-free and gluten-free recipe.

This 15-minute, five-ingredient recipe for the most delicious and mindblowing green beans ever will have you doing backflips while everyone else at your dinner table goes, genius!

I love all veggies, but I admit I have been a bit of a fence-sitter when it comes to green beans. I usually have some around, usually the frozen kind, so I can toss them into curries or biryanis or make a stir-fried side for dal with mustard seeds and dry red peppers. But they are what I think of as a complimentary vegetable and never really the stars. My indifference to these stringy little creatures was so chronic that frankly, if all the green beans in the world had upped and disappeared one fine day, I wouldn't have shed a tear.

Until recently, that is.

Because that's when I came up with this super-easy and incredibly delicious, five-ingredient recipe for Creamy Chipotle Green Beans.

This is an incredibly easy side dish, even if you are prepping the string beans from scratch. You can prep as you go. Put a pot of water on the boil, trim your beans and chop them, and mix up the four-ingredient sauce in a blender. That's all there is to it. Promise.

You can stir up some fried onions or shallots into your recipe for a little extra kick, taking these beans from out-of-this-world to have-I-just-died-and-gone-to-heaven.

As Thanksgiving draws closer, I want to give thanks today for my three trouble-making and utterly lovable sidekicks, Lily, Billy and Leo, who some of you are already familiar with through this blog.

Lily, who came to us as a street rescue from Puerto Rico, has made tremendous progress with overcoming disabling fears and challenges since she came to us in January 2016, not long after my beloved Opie had passed away. Lily, who had no doubt faced terrible abuse on the streets, was extremely fearful of every human she came in contact with, including us, and it was impossible to pick her up or even put her on a leash to walk -- something dog parents would find hard to imagine because most dogs will go into a frenzy at the word "walk." Lily spent most of her time in our home for the first few weeks either hiding under our bed, or under the dining table.

It has taken nearly two years, but Lily is now a happy little creature who loves to eat, loves to run around in the backyard, loves to walk, and who will sit down sweetly to get her leash on. She walks with the energy of a feisty little firecracker, tail up high and wagging, eager to meet other dogs and bark back at anyone who challenges her from across a fence.

Part of the credit for Lily's transformation goes to Leo, who came to us in January this year and has helped bring Lily out of her shell to some extent. Leo is a rescue from a dog meat farm in South Korea who would have met a terrible end had he not been rescued by Humane Society International. He is an incredibly handsome young guy, so much so that he stops traffic (seriously) and has fans in the neighborhood who will bring him toys.

When Leo came to us as a four-month-old puppy who had been confined to a cage since his birth, he wasn't used to walking on a leash either, and even the feel of grass under his feet was unfamiliar. He too was timid for the first few days and would not go out for a walk, but after a few days of getting on the leash reluctantly, he began to look forward to his outings. Eventually Lily, realizing she was missing out on a good thing, began to accompany us. Now, the word "walk" sets off a joyful canine frenzy in our home too. 🙂

The undisputed king of our little animal kingdom is Billy, the sweetest and smartest cat in the world. Billy was rescued in Virginia and found his way to our home via PETA. Like every cat we've ever known, Billy has his wits about him and knows exactly how to get what he wants from us. One area where he frequently butts heads with us is over his ardent desire to go exploring outdoors. We live on a fairly busy city street, and all of our cats have been indoor cats. But Billy, having had a taste of living outdoors in his early life, continues to yearn to get out and will outsmart us by staging an escape every now and then. He usually returns within the hour, because he probably can't stand leaving the house to the dogs for too long. 🙂

On now to the recipe for these delicious Creamy Chipotle Green Beans. 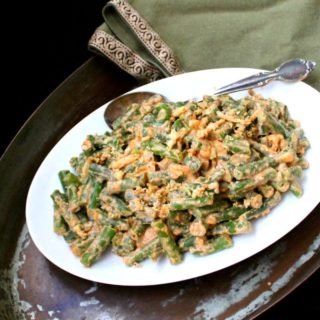