If you've missed popovers after giving up milk and eggs, here is a recipe that'll make you explode with joy. These vegan sourdough popovers have a crispy crust, large air pockets, and they taste simply amazing.

For the last two weeks or so, my family has eaten more popovers than they probably ever wished for, so I could share with you these perfect vegan sourdough popovers.

These are everything popovers should be: they are fluffy inside with that characteristic large air pocket, and they have the perfectly crispy crust that crackles and flakes under your teeth. But to get here, without milk, butter and eggs, has been an exercise in patience, motivation, and ignoring an 11-year-old going, "What, popovers! Again? Really, mom," more times than I can count.

Despite the smartypants quips, and the not-so-subtle lessons in persistence I was hoping he would learn as a happy side-effect of all this baking, I can assure you Jay loved every bite of every experimental popover I have made these past few days.

Each of these attempts produced perfectly edible results. All had great air pockets, and lovely crusts, but there were a couple of problems that were hard to beat: most simply didn't puff out over the tops (and what's a popover without the pop?), while others rose and then fell. Some of the popovers also seemed to have slightly gummy interiors which tasted fine but didn't look so great.

But with this recipe, which I am sharing with you today, I got those problems licked.

Let me back up a bit, though, and tell you about my popover obsession.

I loved popovers. Truly, madly, deeply, and in the days before I was vegan I made some pretty darn amazing popovers, even if I say so myself. But after going vegan, I missed sinking my teeth into those puffy clouds of dough. That's because three of the four main ingredients in a popover are milk, butter and eggs, and they--particularly the eggs--are pretty crucial to the structure and characteristic look of a popover.

I've tried out vegan popover recipes in the past with little to moderate success, but as I have become better at baking with sourdough, the idea of a sourdough popover intrigued me. That's because the gases in sourdough held the promise of the pop so critical in a popver. Smitten, I set to experimenting.

This popover is all that I was hoping and waiting and working for, and I couldn't be prouder to share it with you, in case you too, like me, have missed eating a popover. It's truly been a labor of love, and I hope you too will try it, and enjoy it.

How to make the perfect vegan sourdough popovers:

-The recipe I finally found success with used the usual popover combination of flour, milk (nondairy in my case) and butter (vegan), but I made a couple of key substitutions and additions.

-One of the things I realized was that taking away the eggs and adding aquafaba helped the popvers rise, but it didn't give them the structure they needed, which was probably the reason they didn't rise, or fell after rising, and were gummy in the middle. Eggs have protein and aquafaba doesn't, so I needed to find an egg substitute with protein in it.

-To stand in for the eggs, I used a product called "JUST Egg" which is a plant-based egg substitute made with mung protein (they aren't paying me, and this is not an endorsement).

-You could use tofu too. Use a quarter cup of silken tofu and add another ½ cup of milk. Blend the milk and tofu into a very smooth mixture before adding the other ingredients.

-Make sure all your ingredients are at room temperature. For the best spring, you want your batter to not be cold when you place it into the hot oven.

-Popover batters are quite thin--like a crepe batter, almost. You should easily be able to pour it into the pan.

-Popovers usually bake at pretty high temperatures, but I dialed up the temperatures even more for these. That's because you want the sourdough gases to explode out, which they'll only do in a screaming hot oven.

-Finally, popover zealots swear by either the whisk method for blending a popover batter or the blender method. For this vegan sourdough popover you definitely want to mix the batter in a blender. Not only does this make things easier, but I found that when I mixed with a whisk the popovers did not rise as high.

One of the things to keep in mind that the crust of a sourdough popover will be slightly chewier than a regular popover, because that's what sourdough does. But these also have incredible flavor. Jay wanted to know if I had added cheese to them because the sourdough gives these popovers a really delicious, subtle but cheesy undertone.

What to serve popovers with?

I usually make popovers for breakfast, but they are really great at any meal. We eat them slathered with some jam and vegan butter. You can dunk them into soups, use them to scoop up gravies, and so much more.

And did I say they are utterly kid-friendly? 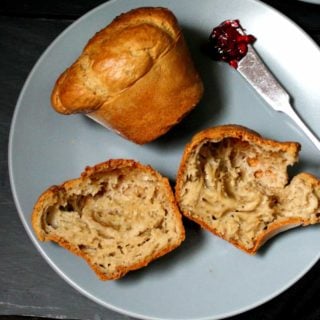