Over the Thanksgiving weekend, Desi and I were at a place as far removed as can be from the rapacious frenzy of Black Friday and Cyber Monday. We were in Thoreau’s Walden, visiting the rich world of a visionary who lived nearly two centuries ago but whose ideas of simple living, self-sufficiency and coexistence with the non-human creatures of our planet are relevant as ever.

Thoreau needs no introduction-- he is an inspiration to philosophers, environmentalists and simple living advocates the world over. Indians know him as the man whose essay on civil disobedience inspired Gandhi’s own movement of satyagraha, or peaceful resistance. With his two-year experiment of living in harmony with nature on Walden Pond near Concord, Massachusetts, chronicled in his masterpiece Walden, Thoreau showed the world how a frugal life pared down to the barest of essentials can be rich and rewarding-- far more so than a life crammed with meaningless “stuff.”

Walden Woods, now a state reservation, is an ethereal place. Even on a cool, gray November day dozens of chattering children,  tourists with cameras and swimmers in unitards converge on Walden Pond, a vast, beautiful expanse of still water that forms the centerpiece of these woods. Despite the hubub it is not hard to imagine a thoughtful, bearded Thoreau ranging through these woods, content in his solitude and pondering life as he looked across the pond. In a corner of the woods, a railroad thunders with a passing train-- just like it did when Thoreau lived here, sometimes disturbing his thoughts.

Although the one-room cabin Thoreau built is long gone (taken down before its historical value became apparent), a replica sits close to the entrance to the park. It was easy to reproduce, a sign tells you, because of how thoroughly Thoreau described it in his writings. Inside the tiny room are a small bed, three wooden chairs (“One for solitude, two for company, three for society.”), a writing desk, and a fireplace to keep out the icy chill of the severe Massachusetts winter.

“Daddy, where did he go to the bathroom?” a little girl asks her father who’s signing the guest book in the cabin. The father looks around, shrugs, and spreads his hands to signal the woods around. “Anywhere he wanted to, I guess.” (Fortunately for the rest of us they do have eco-friendly restrooms at Walden now that use no water.)

It doesn’t take long to remember that outside this well-preserved microcosm, our times are vastly different. In our world, simplifying is not defined by paring down but by adding things that are supposed to make our lives simpler-- smartphones with a million apps that can make calls, store music, tell you the time, what you should be doing, where you are or how you can get there. Humongous cars that thoughtlessly spew toxins into the atmosphere. Food processors that can chop, slice, dice, julienne and whip in seconds.

And to get these-- as we’ve been finding out one Black Friday after another-- we are willing to sacrifice our most meaningful holidays and time with those we love, wade into debt, trample on people, literally, and pepper-spray them too.

I am cognizant of the environment and the difference between wants and needs, but I am no Thoreauvian. I have a smartphone, many kitchen gadgets, and I cram in what's going on with the world by letting the TV run in the background as I cook, clean or even write. I juggle a full-time job with a family and many other responsibilities and hobbies, including this blog, and I need all the help I can get to keep my time under control.

But  visiting Thoreau’s home, so long after I first read about it and was inspired by it, motivates me once again to keep taking those small steps toward the ideals of simplicity and self-sufficiency and toward the day when I can live unshackled by stuff. And -- most importantly-- it inspires me to stay on the vegan path that embraces at once Thoreau’s ideals of coexistence and preserving the planet for those who will follow us, human or not.

Some argue Thoreau was never a strict vegetarian, although accounts are that he was mostly vegetarian later in life. At Walden, he ate lots of rice,  beans which he grew himself, and produce like potatoes, peas, corn, and turnips. But vegetarian or not, his writings reflect a deep love for animals, and for the belief that it was mankind’s destiny to stop eating them. There are few quotes about vegetarianism as astute as these words from Thoreau:

“One farmer says to me, "You cannot live on vegetable food solely, for it furnishes nothing to make the bones with;" and so he religiously devotes a part of his day to supplying himself with the raw material of bones; walking all the while he talks behind his oxen, which, with vegetable-made bones, jerk him and his lumbering plow along in spite of every obstacle.”

So what would Thoreau eat, had he lived today? I like to think that it might have been something like this utterly simple and nutritious Kale and Potato Subzi.

Thoreau was an Indophile (“It was fit that I should live on rice, mainly, who loved so well the philosophy of India”.) He described himself as a “Yogi,” and had studied Indian scriptures, including the Gita and the Upanishads. While I don’t know if he ever had a chance to taste Indian food in those times, there is no doubt he would have loved it if he had-- especially something as simple and nutritious as this subzi.

Kale is a popular vegetable among vegans, and not surprisingly so because of its exceptional nutritional value. It is rich in calcium, vitamins A and C, fiber, and many more nutrients. Because it belongs to the cruciferous family of vegetables, which includes cabbage, cauliflower and brussels sprouts, it is said to have anti-cancer properties. Pretty much an all-round winner.

But when I order kale at vegan restaurants I am usually disappointed because most people tend to undercook it or even leave it raw. Kale is a tough vegetable (as opposed to tender leafies like spinach or lettuce which are delicious raw), and to my mind undercooked kale is almost impossible to love, or eat.

For this subzi, I force the kale into tenderness with half an hour on a stove, but this is not labor-intensive cooking. You can add a little water, slap on a lid, and let it steam away. You just need to check in occasionally to ensure the water has not evaporated. If it has, just add some more.

This is a dish Thoreau could have easily made in the single frying pan he kept in his homestead for cooking. All you need to prep is a knife and a chopping board. And it would go great with rice and beans.

Enjoy, all! And thanks to Desi, as always, for the lovely food pictures and the photographs of Walden Pond. 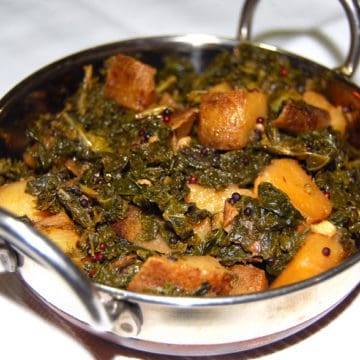 What Would Thoreau Eat? This Kale And Potato Subzi, Perhaps?