I wanted to tell you today about someone very exciting who has joined our family: Kala Jamoon, the most adorable little black cat you'll ever see.

Kala Jamoon, in case you wondered, is named after a black, round, delicious Indian sweet (related to the better-known Gulab Jamoon), in the tradition of our family cats being named after desserts -- except Billy, who, with Desi's help, managed to duck that trend. Kala Jamoon, or KJ, is an older cat who was living outdoors and had an interesting journey to our, and now her, home. 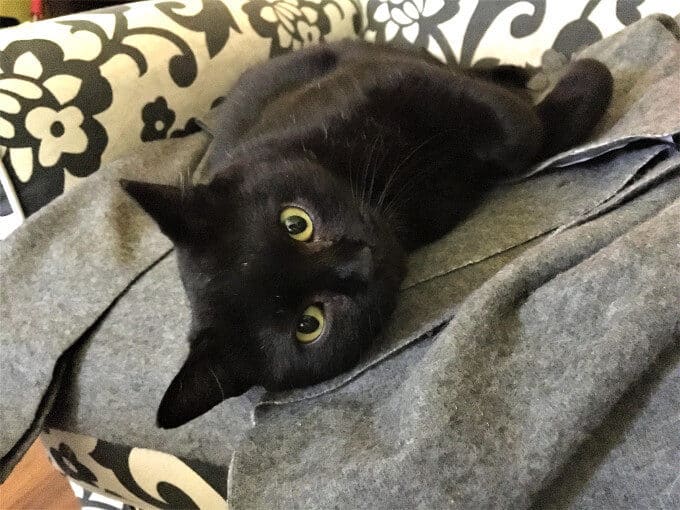 I first met KJ about two months ago, when she casually strolled up to our front yard to eat the food I put out every day for a handful of spayed and neutered feral cats who live in the neighborhood.

There are a couple of black cats among these outdoor warriors, but KJ was clearly a new entrant: her bright green eyes and a smattering of gray hair on her chest -- shaped like a necklace -- immediately set her apart. She is eartipped, which indicates a vaccinated and altered outdoor cat. But while most of the outdoor cats, with the exception of one or two who'll tolerate a few gentle strokes of their fur, tend to not seek human contact, KJ came bounding up to me when I first saw her and began to rub against my legs. When I reached down to stroke her, she was only too happy to give me her head -- in fact, she didn't want me to stop.

She appeared incredibly gentle and friendly for an outdoor cat, and she didn't seem to care much for the food either. On each of her visits, she was followed by another, larger black cat. The minute I'd put the food down, the other cat would run up to it, watching me warily all the time, while Kala Jamoon would make a beeline for me.

I made time to sit down with Kala Jamoon every evening that she stopped by. At about this time, a new next door neighbor told me she was missing a black cat -- a new cat to their home -- who had accompanied her father recently all the way from Singapore. 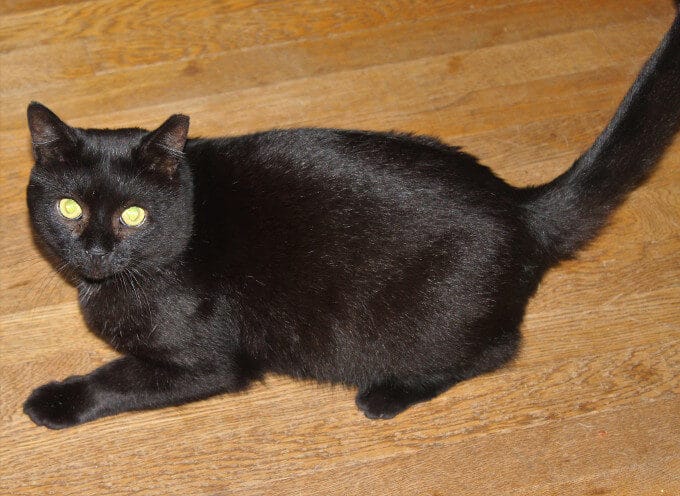 The next time I saw KJ, I knocked on my neighbor's door. The sweet cat had faithfully followed me all the way to their front stoop, but the neighbor's father took one look at her and told me she was not his missing cat.

I had been excited about the possibility of the friendly little kitty having a home, but since those hopes were now dashed, I wondered if we could introduce Kala Jamoon into our home. As an older cat, and being as gentle and sweet as she is, she seemed unsuited for life on the streets. Desi, never averse to the idea of more animals, agreed, but we were both a bit wary -- Leo and Lily are great with our resident feline and king of the house Billy, but they're not exactly wonderful with other cats they encounter on their walks, and since Kala Jamoon seemed to be older, I wasn't sure she could handle these two rambunctious pups.

We were forced to make up our minds that Saturday morning. While taking the dogs for a walk. I found Kala Jamoon sitting in the bushes outside, waiting for me. This was unusual because until then she'd only been a nocturnal visitor. And when she remained there for the rest of the day, we couldn't stop ourselves any more: so we locked the dogs and Billy upstairs and opened the door to ask Kala Jamoon if she'd come in. She spent exactly five minutes preparing for it by rubbing herself against the door before she walked right inside.

She's been an indoor cat since, never once asking to go out. She has been with us for about six weeks now, and she's made good progress with her furry siblings. We allowed Billy to meet her first, and he was not happy to find another kitty on his territory. He tends to get jealous when we give her attention, but over the weeks he's beginning to tolerate her and we see some small but hopeful signs that they might become friends after all. During our three weeks in India we found an amazing catsitter experienced with outdoor cats to look after them, and left by themselves most of the time, Billy and KJ no doubt warmed up to each other just a little.

Leo has been amazing with the new addition. Although the bigger of our two dogs, he is a complete sweetheart. After KJ batted a paw at him during their first meeting, he knows very well not to bother her and is even a little afraid of her. 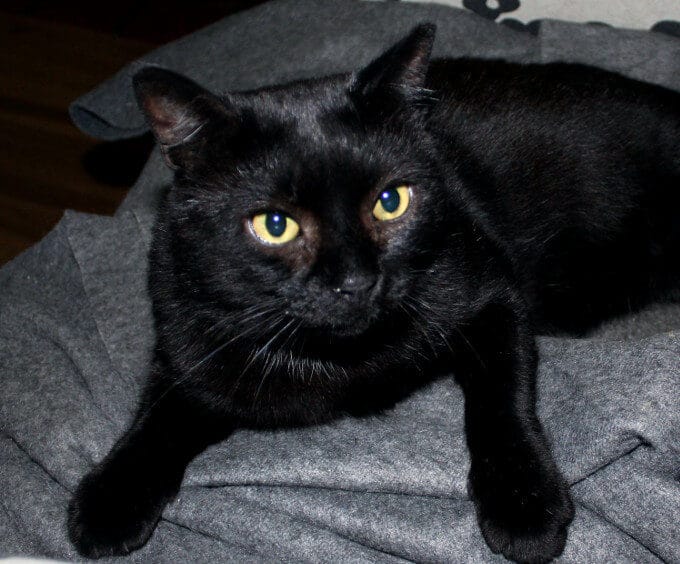 Lily, however, is another story.

Very territorial by nature -- probably because of her early history as a street dog -- Lily was, especially at the beginning, very confrontational with KJ. But over the weeks she has become slightly more accepting. KJ still won't easily move about the house when Lily is around, because she is probably afraid of being chased, but she has a few spots that she is comfortable in, like a chair in the living room and the couch in the den, from where she will aim a well-timed bat of her paw at Lily when the little dog begins to sniff and growl at her. Knowing cats, I am quite certain that within a few months KJ will find a way to get along with her, because cats are nothing if not wise. And I don't think there's ever been a cat that's let a dog get the better of them.

I do still have one challenge with KJ that I've been trying to work on. When I tried to get her in a carrier to bring her to the vet, she scratched me and ran away into hiding for the rest of the day.

While I've never known a cat who loves the carrier, I have never had a huge problem with getting Billy, and Pubm and Pie before him, into the carrier when we need to make a visit to the vet. I do need to get KJ in for a checkup so I tried asking some people at work, including our resident cat expert, and I was given tons of great advice, but unfortunately nothing has worked so far. I even bought a soft cat carrier-- since the hard one tended to freak her out -- and tried to get her used to it by giving her treats and her food in it. Although she sits in it occasionally, she usually runs out the minute she sees me. So that hasn't worked out very well so far either. If anyone that's adopted an outdoor cat has any tips, I'd love to hear.

You'll no doubt be hearing more about KJ as she settles in our home. She sends you a quick, short hello (because that's how she speaks, while Billy has a long, lazy drawl) and a friendly bat of the paw to say, give me a head rub please!

Here's a photo of Billy, who was feeling a little left out. 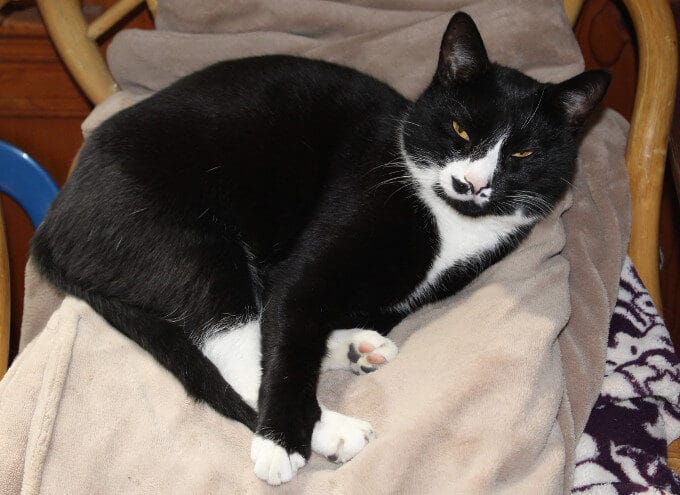