A happy post today to introduce you to our two newest family members: Billy the Cat and Lily the Dog. 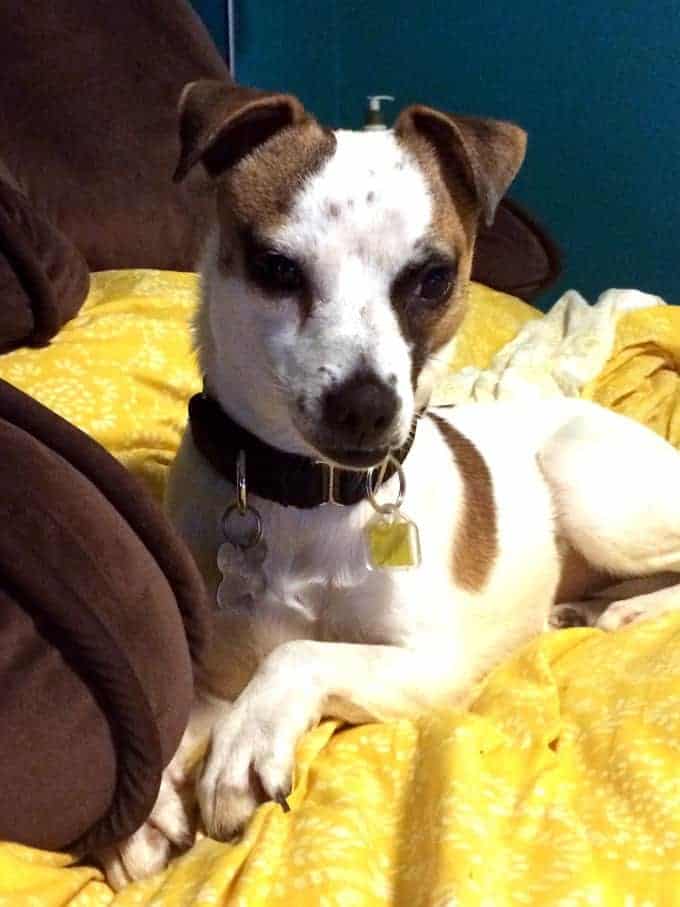 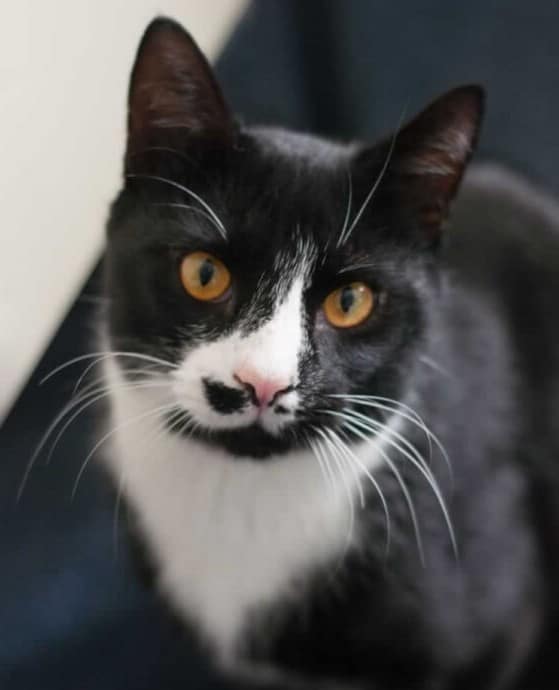 Billy and Lily have been with us for a couple of months now, but I've not spoken about them before because I was waiting to do a proper introduction. As you can see, they are such classy little creatures, they merit a post all their own. 🙂

Lily came to us just a couple of weeks after Opie had passed on. She is a street dog rescued from Puerto Rico with very special needs. Lily is painfully timid and afraid of just about everything. People petrify her, even a moderately loud noise sends her scurrying to hide under the table or the bed. When she first came to live with us, about eight weeks ago, she would not let Desi or me touch her or approach her. Her foster, my coworker Anna, told us she might have been abused on the streets -- one side of her impossibly cute face is lopsided, with a tooth that sticks out, and it is possible she was kicked or hit hard in the face while still a puppy, causing her jaw to malform. Her tail remained firmly tucked between her legs almost all of the time, and she was terrified about going on walks-- sad, when you think of the fact that most dogs love walks more than anything else in the world. When she saw a "crowd" of four or five people together, she would shake like a leaf. 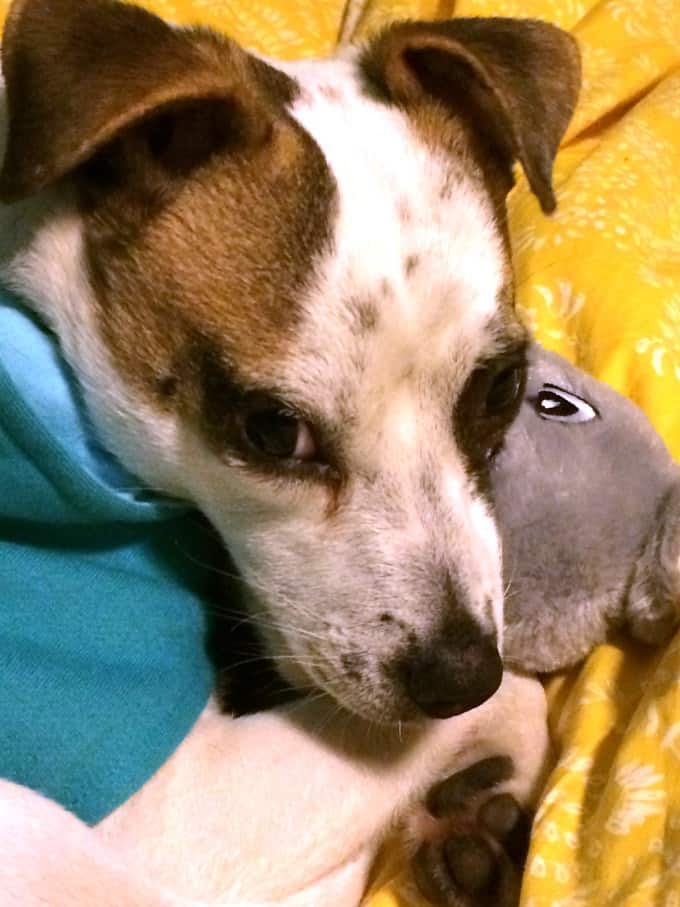 By now Lily has warmed up to us -- a bit -- and will give us a huge welcome when she sees Desi and me, even if we have been gone for a few minutes. At night she will sleep squished up against me, as if she wants to be sure I am around. Her tail's out and wagging most of the time now, and she loves it when I pick her up, after she has approached me, and will give me long, loving kisses. She has also managed to chew her way through an electric blanket, my laptop cord, a pair of prescription eyeglasses, a couple of cushions, several shoes and the bathroom rug, among other exploits.

She will still run away, though, when we approach her, and small incidents -- like a plastic jar that noisily fell to the floor in the pantry the other day while she nosed around behind me -- will set her back several days. We have managed to get her out for walks, and she is doing better at not jumping every time she hears a car, but she also still doesn't want to voluntarily go for a walk: she would rather just trot around and play in our decent-sized back yard.

It will probably take a while, but I know she will heal: dogs have such an incredible spirit, and although Lily's appears to have been broken by some lowlife, she will learn to trust again. 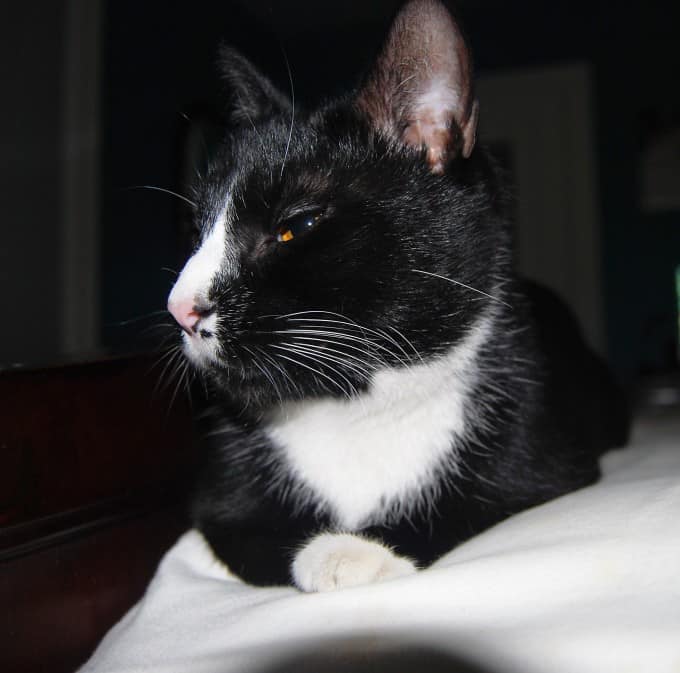 Billy came to us through PETA. This handsome tuxedo cat arrived at out home, carted by Ingrid Newkirk herself, one stormy February afternoon as the snow piled outside. Billy was living on the streets near Norfolk, Va., where PETA is headquartered, when someone trapped him and brought him in. He lived at the PETA office for a few weeks while he waited for a home, winning over the hearts of all those who worked there, Ingrid said. They even made a video of him going a little wild in a ball pit (he was called Henri at the time but we named him Billy because it goes so well with Lily -- and Desi thought it was really funny because it sounds similar to the Hindi word for cat).

Billy is indeed a gentleman - he is incredibly sweet, incredibly vocal, and incredibly lazy. Most of his day is spent either sleeping, grooming himself, or demanding treats, but give him a ball -- or a mouse (and we get a few of those in our old house) -- and he will chase it tirelessly. He also likes napping on my laptop. It's possible that he was an extraordinarily friendly feral, or an indoor-outdoor house cat who had lost his way. Right now, it's a bit of a challenge keeping him indoors because he will try to run outside every time the door opens. But he is learning there is plenty to do indoors: he has a bed right by our bedroom window and it suits him perfectly to just lie there and look outside at the birds and squirrels. Lily and he have become friends -- with a healthy dose of sibling rivalry thrown in -- and enjoy playing with each other or curling up next to each other when they've tired themselves out. They are so cute together! 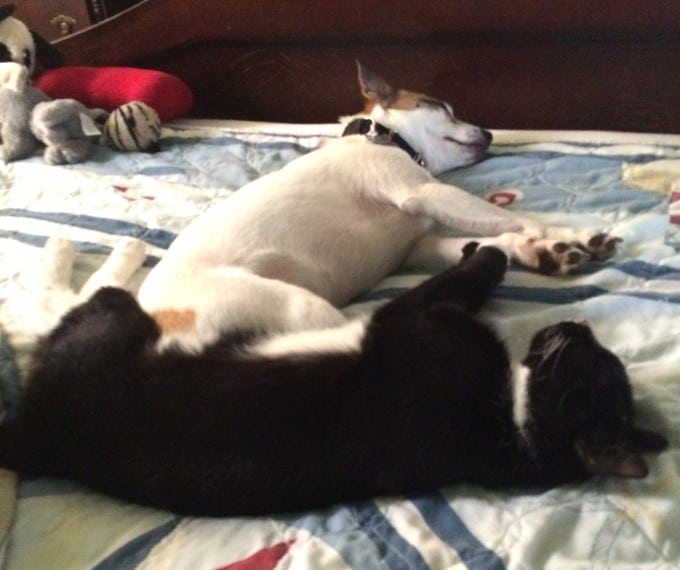 Every dog and cat that has come into our home has been a rescue, but this time round I felt especially passionate about adopting animals who had lived on the streets. Coming from India, where one is always surrounded by homeless dogs and cats, I have a special place in my heart for these incredible warriors who carry on with their lives despite numerous challenges: traffic, stupid people who think hurting a dog is either necessary or enjoyable, and lack of food in lands where people have very little themselves.

The first street dog I knew and loved when I was a little girl was Moti, a yellow, extremely dignified creature who lived under the stairs of our Bombay apartment building. Moti belonged to everyone in the neighborhood. The kids doted on him and brought him any scraps of food their moms would let them have. When the pound van would make its rounds (this was before India stopped animal euthanasia), some of us kids would scramble to fetch Moti and lock him up in our flat. Others would keep a watch from the building's terrace and once the van was safely out of sight, Moti would be let out. He was the sweetest possible dog and the only time he actually bit someone was when this rather nasty brat, Sujit, kicked him. There was general consensus in the neighborhood that Sujit deserved that bite fair and square.

I will be telling you more about Lily and Billy in upcoming food posts. Stay tuned, and if you've adopted a street dog, I'd love to hear about your experiences in getting them settled in.

*Meet Kala Jamoon, the latest addition to our family!