Arbi Paratha is a flaky, crispy, delicious flatbread made with the starchy colocasia root, chickpea flour and sorghum flour. It makes a tasty, gluten-free snack or meal.

One vegetable I always pick up during my monthly trip to the Indian grocery store is arbi, or colocasia.

This rather unpretty root vegetable can be hard to figure out for someone who's never cooked or eaten it before. If you haven't, think of it as the low-profile but high-impact cousin of the wonderful potato -- now there's someone we all know and love.

Arbi has a whiter, denser flesh than potato's, its skin is pretty much inedible, and its flavor is bland with addictively earthy tones.

But in Indian cuisine, you can do with an arbi pretty much what you can do with a potato-- you can make a delicious subzi out of it, shallow-fry it into crispy deliciousness with a few spices, dunk it in a sauce, or, like I did this time, turn it into a flaky, wholesome paratha, a vegan, gluten-free flatbread, that your tummy and your tastebuds will thank you for.

The paratha is gluten-free, partly because I wanted to try out some singoda flour, or water chestnut flour, that I also picked during my last trip to the Indian store. I had never eaten singoda flour before but it is commonly used in north India during religious fasts-- in fact, all foods eaten in India during religious fasts tend to be gluten-free (I am not sure about the rationale behind that).

I also added some sorghum or jowar flour to the recipe, and some besan for a little added crispiness. If you don't mind the gluten, you could also just make these with whole-wheat flour. Sub part or all of the gluten-free flour with wheat and follow the rest of the recipe.

The technique I used for this flatbread is an offbeat one-- instead of making a stuffing, like one would with Aloo Paratha, I actually mixed the colocasia, boiled and mashed, and some spices and herbs into the flour. This also works better because gluten-free breads can be hard to roll out. If you make this paratha, try patting it out like another great Indian bread that often tends to be gluten free-- Bhakri. 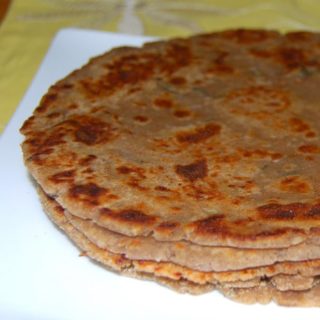