Valentine's Day this year marks a very special milestone for my one true love and me. It was 25 years ago, on this day, that Desi and I were married.

I was a journalist just starting my first job in Bombay at a newspaper called The Independent, created by the Times of India group to cater to India's growing crowd of middle-class yuppies. The newspaper, modeled along its British counterpart of the same name, wasn't as profitable off the bat as its creators had hoped, and died after just five brief years. But it did accomplish one thing: because of the large number of young people it employed, it ended up creating many love matches that have lasted to this day. Ram and Rajee. Malathy and Amberish. Seema and Srikumar. And many more.

I was very young when I joined The Independent, filled with a yen for adventure and independence, and fiercely determined to not get married at least another 10 years, unlike my cousins who had settled into arranged marriages before they had their college degrees in hand. I thought I knew it all. Desi was my boss, with a few years' experience at The Indian Express under his belt and a distinctly British accent that puzzled everyone. He thought he knew it all. It was unlikely that two know-it-alls would get along with each other like a house on fire, but it took us just a few months to realize that we were meant to be together and, despite my plans, we were married within a year.

Desi and I are very different: on the surface. He's quiet at first, patient, and absolutely without judgment on anyone or anything. The nicest person I know. I, on the other hand, have a quick temper that rises and falls in an instant, making me say and do things I regret. I have opinions on everyone and everything.

But underneath the surface, and what perhaps has kept us together and close over all these years, we are really not that much different. We care about the same things, including the animals who have been an integral part of our family. We have had good days and bad days, like every couple. We have uprooted ourselves from one home, India, and toughed it out together till we made it in another, the United States. We have stood by each other through deaths in our families, the deaths of our beloved furry kids, a couple of job losses for me during the recession, and through the adoption of a human child, Jay, which has often been a rough road, although not without its rewards. We have made it through and gotten even closer because we have never put our relationship second to anything else in our individual lives.

Married couples will often say they are each other's best friends, and it sounds a little cliched and sugary, but the truth is that you cannot live with a person for 25 years and love them more than you ever did without being as close as two people can be. For me, the room still lights up when Desi walks in. He is the first to hear when I have some good news, and the first I go to when I want to cry. The one who knows the terrible things about me that I would never confide to anyone else, and still loves me despite them. He makes my world complete.

I wanted to share a very special dessert with you on this very special day. And these vegan Pots de Creme are the perfect little treats to show someone you love just how much they mean to you.

They are rich and smooth and creamy and the chocolate and vanilla-- another match made in heaven -- marry together perfectly.

I have these rather cute demitasse cups that I picked up at a yard sale last year, and I used them to serve the pots de creme, but you don't need to fancy it up. Go with any old ramekin. This dessert is so special, it does not need any dressing up.

I'll leave you with the recipe for these perfect little vegan pots de creme, and all of my best wishes for a very Happy Valentine's Day. 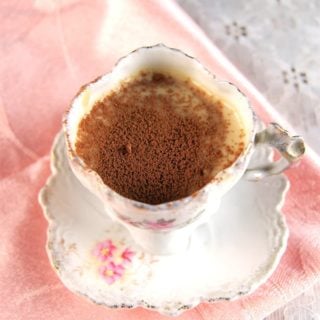