Jump to Recipe Pin Recipe
A flavorful, easy and quick Pressure Cooker Vegetable Biryani that gets done in minutes, and is as luscious and indulgent as a longer-cooked version.

One-pot meals are my favorites, and if they cook up really fast, even better. But what really sweeps me off my feet with this Vegetable Biryani is that it is every bit as rich and luscious as you'd expect a biryani -- a dish notorious for requiring long cooking times -- to be. Even when you just put in half the work and a fraction of the time.

It takes me under 30 minutes to make this biryani, and that includes cooking time. And I actually prep and chop the vegetables. If you use frozen veggies that are already chopped, I would have just this to say to you: aren't you the smart one?

For this biryani, forget mise en place or any hoity toity ideas of doing things just so: instead, prep as you go. I heat the oil, add the onions, chop up the rest of the veggies while the onions cook, get the final ingredients ready while the veggies cook, and then all I need to do is lock up the pressure cooker and watch television while the biryani gets done.

Like most people who adore Indian food, I am a huge fan of biryanis. They are indulgent and flavorful and they make any meal extra-special. When made in a pressure cooker, they are also extra-healthy. The pressure cooking preserves valuable nutrients in the food, which would leach away on the stovetop, and it makes all of the vegetables perfectly tender without overcooking them. A huge bonus: you won't believe the aroma that wafts through every nook and cranny of your home and lingers for hours afterwards, making you want to stuff your mouth full of biryani. 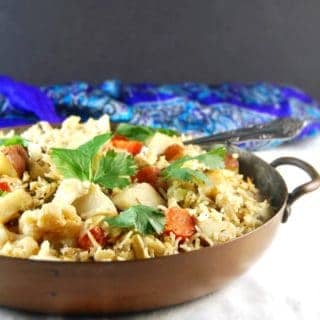 I used a stovetop pressure cooker for this recipe, but if you have an electric one or an Instant Pot, go ahead and use it. If your cooker has a "brown" function, you can proceed just as directed for the stovetop version, but if not, you will have to do part of your cooking on the stovetop-- up until the step where the vegetables are sauteed and cooked and the fried onions are stirred in. Then transfer the veggies to the electric cooker, add the biryani masala, coconut milk, lemon, rice, and salt. Set your pressure cooker timer to five minutes or as directed by your manufacturer.