A delicious but minimalist Virginia Peanut Soup made with roasted peanuts and six other ingredients. This soup is packed with protein and fiber and makes a meal by itself. A vegan, gluten-free, soy-free recipe. 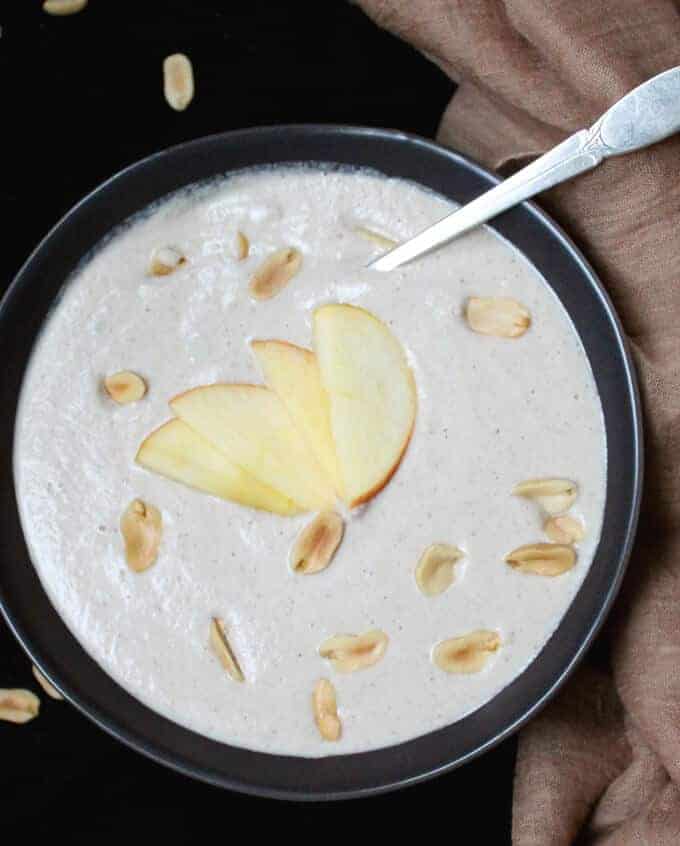 Some of the most memorable meals I've eaten haven't been at fancy restaurants or on big occasions; rather, they have been simple, homely meals made memorable by the experiences surrounding them. Like a dinner cobbled together in the kitchen of a rental home after reaching Chakala, a beach town in Mexico, late at night and finding no restaurants open. Lucky for us, we managed to find canned beans and plantains at a tiny store nearby that was just about to close. I can still remember the flavor of beans, which I cooked with a bare minimum or no spices because we didn't have any on hand, as we ate them sitting on the porch and watching the ocean unroll before us. 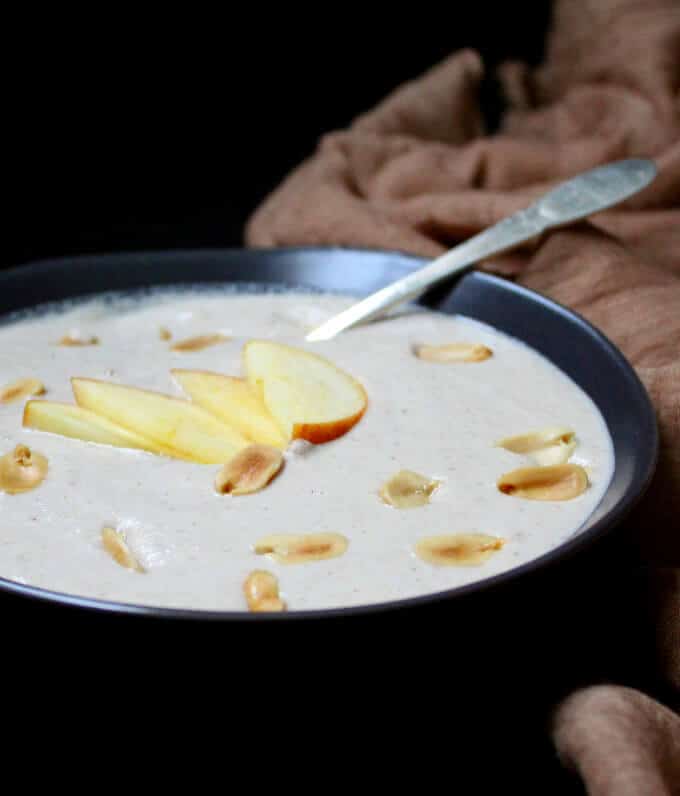 Or a hearty South Indian meal eaten at the Concerns eatery right off Bombay's Matunga station. The waiters would dump the food -- delicious comfort food like sambar and rasam and rice and pachadi (a south Indian raita) -- right into the large banana leaves that served as plates, and you could polish off as much as you wanted without any ceremony or silverware before washing it all down with aromatic filter coffee.

Or a simple but amazing peanut soup that we ate at a hole-in-the-wall eatery in Leesburg, Virginia, late one night driving home from a road trip. 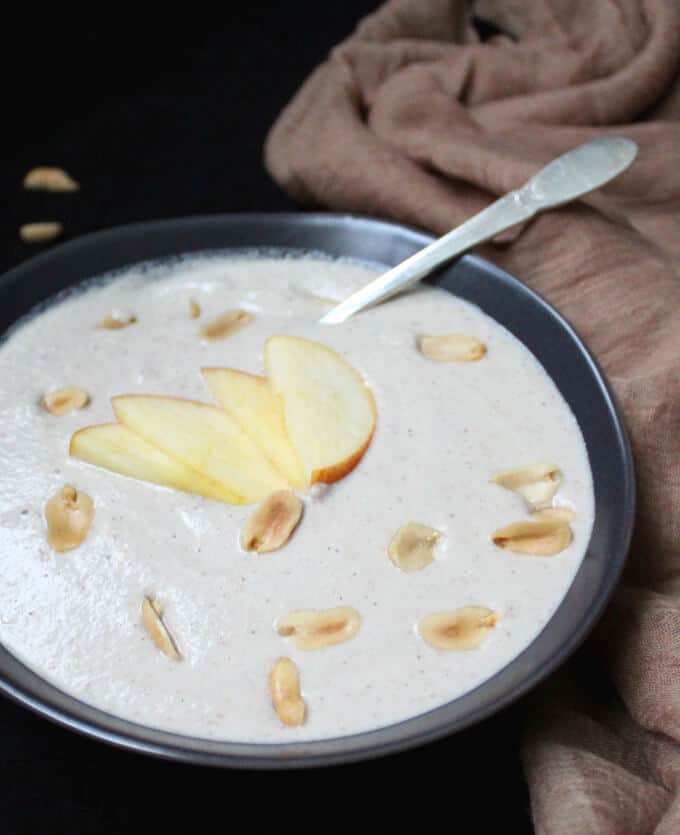 I get so busy fusing this recipe idea with that, or trying to come up with new recipes, I sometimes forget the pleasures of cooking and eating traditional foods that have survived the test of time and the tastes of generations. The Virginia Peanut Soup, said to have descended from a West African recipe, has its own share of lore in its home state, famous, of course, for its peanuts. George Washington is said to have loved peanut soup, and it is perhaps one of the more famous dishes served in Colonial Williamsburg (that version is not vegan because it includes chicken stock, and I couldn't eat it the couple of time I've visited Williamsburg).

There are other restaurants and eateries in Virginia that have their own famous versions of this soup, but I doubt that any of them would taste much better than the soup I ate at that tiny restaurant in Leesburg.

I used a recipe from the Washington Post and followed it fairly faithfully. The process was rather simple and didn't require that much effort or time, save for soaking the peanuts in advance for about four hours.

It's important to use roasted, unsalted peanuts to begin with because the roasting adds more flavor to this minimalist soup. The flavor base has just a few ingredients, because you really want the peanuts to be the star here.

One of the reasons I loved the Post recipe for the Virginia Peanut Soup is because it starts out with peanuts and not peanut butter, like many peanut soups do. While peanut butter in a soup would be tasty, the flavor of peanut butter is quite different from the fresh flavor of the roasted and ground peanuts in this soup. The soup is also a pretty, light color, although I will also add that in the photographs, for some reason, it appears whiter than it actually was.

One of my favorite things to do is garnish this soup with all kinds of fun things that add more flavor and texture. The Post recommends apples and peanuts, but I also love chopped up candied ginger or even crackers (especially for Jay who loves a mix of all these in his soup).

Although a peanut soup sounds rather heavy -- and there are versions that use cream -- this soup is surprisingly light at just 174 calories a serving. It is also full of protein and fiber because, let's not forget it, peanuts are really legumes. 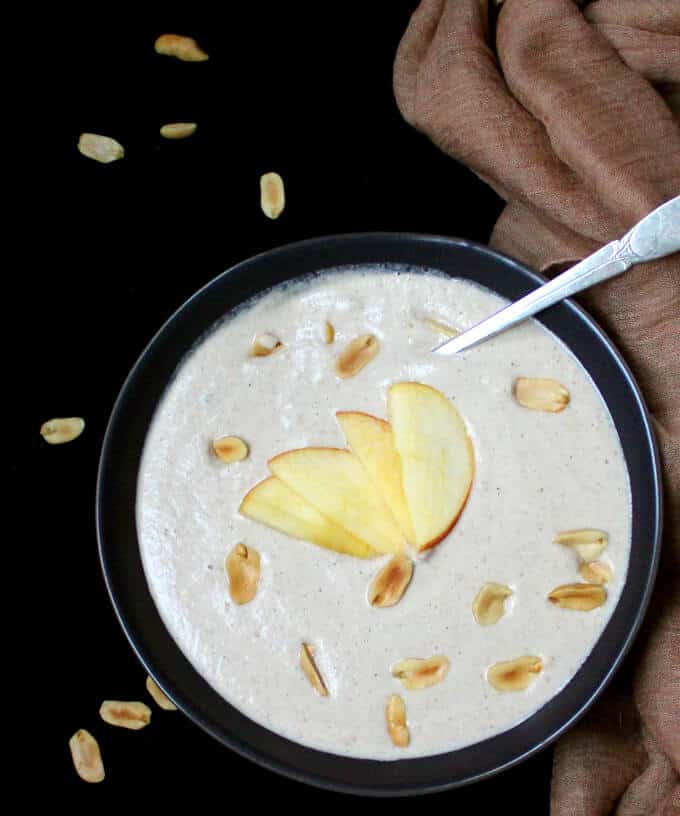 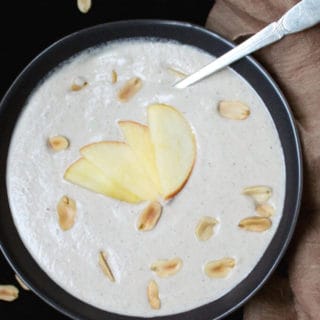 For a more delicate and smooth texture, put the soup through a fine-mesh sieve after blending, and then warm.