This Hyacinth Beans Masala Rice Pilaf is the stuff of mom's cooking in Indian homes. It's a traditional dish that's as tasty as it is nutritious and easy to make. A soy-free, nut-free, gluten-free and vegan recipe.

I love rice dishes for weeknights, especially simple ones like this delectable rice pilaf with caramelized leeks. Of late I've also been trying to cook more with legumes than I already do. So I decided to combine both of those delicious ingredients in this amazing Hyacinth Beans Masala Rice Pilaf that is made often in Maharashtrian homes in India.

A hyacinth bean, called vaal in India, is a rather compact-looking beige bean with a black and white eye, and I don't ever recall seeing one in supermarkets here. Some online recipes confuse these beans for lima beans or fava beans, which are in fact very different beans. Hyacinth beans are easily available at Indian grocery stores here in the United States, and if you don't have one near you, you could certainly use quick-cooking beans like lima in your recipe.

I first came upon a version of this rice pilaf years ago on one of my favorite spots to find Maharashtrian recipes, the One Hot Stove blog written by Nupur. Called Dalimbay Bhat in Marathi, this pilaf appears homely and simple, but don't underestimate it because it is incredibly delicious.

Over the years I've tweaked this recipe only slightly for practical reasons. Nupur's original recipe requires you to sprout and peel the beans, which produces a more delicate flavor. I usually do this when I cook this pilaf in summer, and it's an effort well worth the time.

But with the freezing temps we've had of late, sprouting has become a rather time-consuming -- and sometimes impossible -- thing to do. So instead I opt for just soaking the beans overnight and then giving them a quick boil for about 15 minutes before using them in the pilaf. This tenderizes them just enough so they can continue cooking with the rice in the pilaf without falling apart.

I don't want to oversell you on hyacinth beans if you haven't already eaten them, but there's no good reason not to eat them, and many reasons why you should. Like all beans, they are fiber and protein stars, and they are nutty and delicious. They are also high in iron and calcium, both good reasons to incorporate them into any diet, but especially a vegan one. At the Indian grocer's, they go by the name "vaal" beans. Look for them. You'll be happy you did. 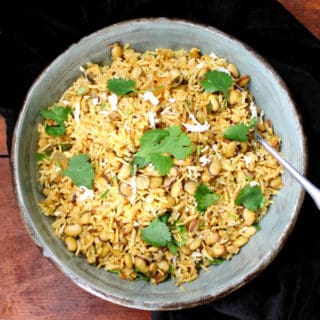 Dozens of birds (starlings?) huddled together to say warm along my neighbor's windows and eaves on one of our coldest days last week, when temperatures dipped several degrees below freezing point and stayed there for a prolonged period. Birds are warm-blooded, like us, and although their bodies do adapt to some extent to face the cold weather, they need your help, especially when the weather is so harsh. Be sure to feed birds in wintertime -- I used to be negligent about putting birdseed out in winter until I read articles that say birds with access to feeders survive the cold weather at a higher rate than birds without access to feeders. If possible, also provide them with water (heated bird baths are available if you live in an area where temps drop below freezing often).