Savory, delicious and kid-friendly Naan-Calzones: naan stuffed with a spicy Indian curry called a kheema and folded into calzone-like pockets. They are a perfect snack or lunch to brown-bag.

I think people who don't like pizzas are a little weird. No, a lot weird. Especially when they are married to me.

Yes, Desi-- my Desi-- is not a lover of the almighty pizza pie. Sure, he will eat it quietly when we order in a pizza, or when I make one at home, but I can honestly tell that his tummy is longing for something else. Most likely something that involves rice or pooris.

I, on the other hand, couldn't love a pizza more. It is right up there among the foods I might order for my last meal. In fact, after going vegan I missed ordering pizza so much that I almost dropped to my knees and said a tiny prayer to the Italian gods when a Z Pizza opened in my neighborhood with multiple vegan choices.

As someone who loves pizzas quite so much, then, I am always trying to find ways to make versions that are not just vegan but also Desi-friendly. Today's recipe for Naan-Calzones is a perfect example of a pizza variation that we both can love because it appeals not just to my vegan tastebuds and Desi's not-so-vegan ones, but also to our shared love of Indian food.

A calzone is basically a stuffed pizza, or a pizza turnover, or what have you. You stretch the pizza dough, stuff it with a filling, seal it, and bake it all up in the oven. What you get is not just delicious food but food that's more fun and portable, say, than a slice of pizza.

The twist to my calzone, as you may have gathered from the title, is that it's not made with pizza dough but with naan dough. Naan is something most of you have had at some time or the other at the Indian restaurant and it is a puffy flatbread that's baked in a clay oven, or a tandoor. It tastes especially ethereal when used to scoop up spicy curries.

A basic naan dough is not unlike a pizza dough, except that it bakes up a little more tender and flakier and puffier. Perfect because one of Desi's peeves is that pizza crusts are too thick and too chewy. To stuff into my Naan-Calzone, I made a spicy "kheema" filling. Kheema, in Hindi, means mince (usually mutton mince). Since Holy Cow! is an animal-free zone (food-wise), and very happily so, I made my mince with textured vegetable protein, or TVP. This is such a rich, spicy dish that there is no way you will miss the meat in here-- in fact, even a meat-eater might actually think there is meat in this dish because of the great texture of the TVP.

I am feeling a little better now, and I want to say thanks to those of you who wrote in to wish me well. Opie, who also incidentally had surgery for a broken cruciate ligament last week, is recuperating, although keeping him from trying to run around is a HUGE struggle. He has been particularly unhappy about the large cone around his head that keeps him from licking the sutures. He has also been getting increasingly good at getting it off-- last night I caught him in the act as he was trying to prise it off his head by pushing it against the couch. Those dogs. 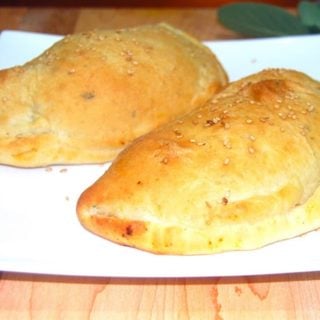 For the keema filling